Anxiety peaks after 105 deaths in one day – Rife lockdown scenarios 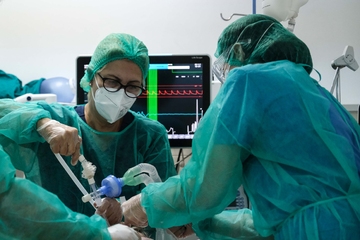 Despite the government’s assurance that the country will not lead to a horizontal lockdown, scientists do not rule out any possibility

The worst-case scenarios for the course of the coronavirus and the loss of human lives are in danger of becoming reality, as the explosion of daily cases from the beginning of November is accompanied by the rapid increase of dead and intubated, with all that entails for the exhausted NHS.

The death toll announced yesterday, Monday 22 November, is shocking: After some time, the death toll has risen to more than 100, reaching 105. The intubated patients, who were expected to “break” the barrier of 600 at the end of the month, rose to 608 yesterday, from 590 on Sunday. The course of the tough epidemiological index is predicted to be rather ominous, given the 10% increase in just one week.

These relentless numbers come on the first day of implementation of the new restrictive measures for the unvaccinated, with what follows also causing ominous predictions, at least for the next two weeks, when it will be seen if the measures have worked.

A total of 1487 people lost their lives in November, at a time when the pressure on hospitals is still unbearable, and staff is exhausted.

Concern in the red – “Pressure will increase in hospitals”

These data cause terror and scientists are going against the government’s certainty that the country will not be led to a horizontal lockdown do not rule out any possibility, noting that this is an option, “which remains in our quiver”.

According to experts, the fourth wave of the epidemic has not peaked and this means that we will be able to count over 7000 new cases per day in the near future. Consequently, the deaths will increase. Based on the example of previous waves, most of the loss of life was recorded when the epidemic was out of control.

The President of the Panhellenic Medical Association, Athanasios Exadaktylos, commented on the tragic situation in the country, sounding the alarm bell for the future, expressing his concern and the pressure that the NHS is receiving.

“We live in a time when the virus is everywhere. We must be careful of everything, those vaccinated and those unvaccinated. The unvaccinated are 95% of those intubated and have the highest percentage of deaths”, said the President of the Panhellenic Medical Association.

“According to the models we had in mind, we were expecting 600 intubated patients at the end of November and they came a week earlier. This means that the pressure on the health system will increase “, he warned and stressed that the country’s possibilities in terms of the availability of beds are not unlimited, as there are other diseases besides covid. “We have to find a way to reduce the spread.”

Reassessment of measures – The two scenarios

The measures will be re-evaluated next week. The panel of experts will study the epidemiological data, evaluate the effectiveness of the measures and decide whether new restrictions are needed to stem the pandemic.

However, many scientists anticipate that measures and restrictions will play a leading role this Christmas as well.

The government has two possible scenarios in mind: The first is that the pandemic will peak in early December and the second and worst case scenario is that it will peak after Christmas.

It also has two lines of defense, trying to avoid a general lockdown, imposing new restrictions on the unvaccinated, if the risk of the pandemic escalating by next week is evident, based on the bad scenario in this case.

What is being examined

According to Star tv, in the first phase, the exclusion of the unvaccinated from the mixed dining areas will be discussed, ie they will only be allowed to take away.

At the same time, there will be an exclusion of the unvaccinated from the markets inside the commercial stores, who will be able to shop only with ‘click away’.

If necessary, the rapid test for the unvaccinated in supermarkets will be on the table, but this is estimated to be the last measure that will be selected.

The week we are going through, however, is considered crucial and there is still hope that the measures in combination with the vaccinations will work.

It is estimated that the first dose vaccinations will reach 7.4 million euros at the beginning of December, while an incentive for vaccination to those over 60 years of age has been discussed.

Nightmare forecast for 3,000 dead by Christmas

At the same time, the prediction of the professor of pulmonology and director of the pulmonology clinic of the University of Thessaly, Konstantinos Gourgoulianis, for the course of the coronavirus is nightmarish.

As he estimated speaking to Star channel, by Christmas 3,000 of our fellow human beings will die from the deadly virus.

“Lately we have chosen because we have not been vaccinated to be immunized against naturally through infection. Because the infection exists in our families, in everyone’s families, what will happen is that almost all the people who have been exposed will be infected, resulting in the loss of several people,” explained the director of the pulmonology clinic at the University of Thessaly.

“With simple math, 50-60 people die every day for 50-60 days that this wave lasts – we unfortunately easily reach a number of 3,000 people who will lose their lives by Christmas,” he concluded.