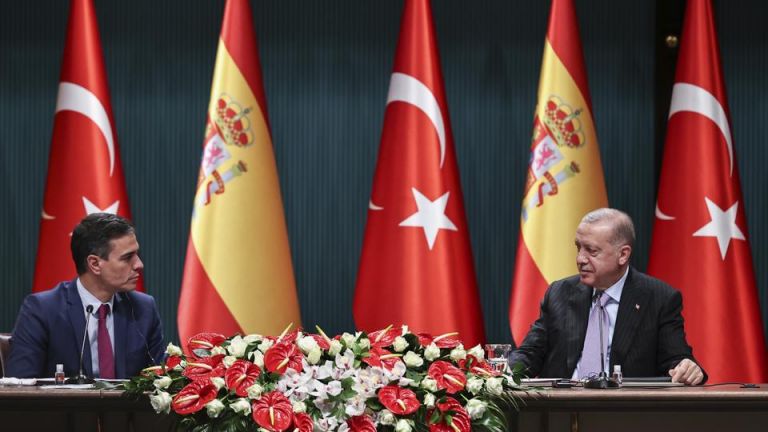 Spain is arming Turkey. It is all the more curious when one considers that Spain is a member of the MED-9 group of Mediterranean countries that is working more closely with Greece, and it is certainly unacceptable.

Spain is arming Turkey. It is all the more curious when one considers that Spain is a member of the MED-9 group of Mediterranean countries that is working more closely with Greece, and it is certainly unacceptable.

During a visit of Spanish Prime Minister Pedro Sanchez to Ankara, the reinforcement of the defence cooperation between the two countries was announced.

Among other things, that included the building of a new Spanish aircraft carrier for Turkey (a smaller one named Anadolu is already under construction) and the sale of other arms.

From the point of view of a third party, Greece and Turkey have already launched an arms race by attaching themselves to various EU countries – Greece with France and Turkey with Spain.

This situation highlights the huge drawbacks of EU policy – the absence of a common policy in the area of arms exports – but that of course does not permit Spain to disregard European Council decisions regarding Turkey.

The Greece-France case is of any entirely different quality, as both are EU member-states and their cooperation is in the framework of the overall process leading toward strategic autonomy and defence.

There is a reference to Turkey in the “Strategic Compact” plan, the text laying out the EU’s strategy for confronting threats and challenges over the next years, which was presented by EU foreign policy chief Josep Borrell and was discussed by EU foreign ministers.

“Securing a constructive and positive relationship between the two sides will benefit both the EU and Turkey,” it says. That requires the Turkish side to “proceed on the path of cooperation and viable de-escalation and to respond to concerns regarding the Conclusions of the March, 2021, European Council.

Hence, the Compass that describes the threats with which the EU is confronted in no way views Turkey as a threat. According to Euroactive, Greece and Cyprus (invoking arguments such as Turkey’s aggressiveness), requested that Turkey be specifically named as a “state-threat” for Europe.

However, with Spain, Germany, and other countries involved in arms deals with Turkey, it would be difficult for Ankara to be described as a “threat”. It is oxymoronic to arm a country that threatens us.

The view of Brussels is that, “Europe is stronger when Turkey is with it rather than against it.”

Greece, too, must ask itself if indeed it is in its interest to characterise Turkey as a whole as a threat to the Union, even if our side considers it so.

The text of the Compass has a section on security at sea that underlines respect for international law, including the Law of the Sea, so Greece has a wide field in which to promote its positions.

Interestingly, the Compass makes no mention of arms exports and the orientation that the Union must have (despite the deficiencies of the Treaty).

Consequently, Spain (and Germany) have no formal commitments not to arm Turkey.

Still, this stance is not in accord with the policies and moral duties of solidarity that each EU member-state has individually.

Certainly, it is not in line with socialist ethics, Mr. Sanchez.

I recall that in 2018, while in Delphi with the late [centre-left Movement for Change leader] Fofi Gennimata, we had a meeting with Pedro Sanchez, then in the opposition.

Fofi raised this issue, which has been around since then. His reaction was that such arming is “outside the morals of socialists”.

It seems however, that at the end of the day…it is not.

*Professor Panagiotis Ioakeimidis is a former ambassador-counsellor of the Greek Foreign Ministry and an advisor of FEPS and ELIAMEP. His latest book, entitled Achievements and Strategic Mistakes in Foreign Policy After the Regime Change, has been published by Themelio Editions.