Remembering the Athens Polytechnic uprising: The eyewitness account of a brave Dutch journalist 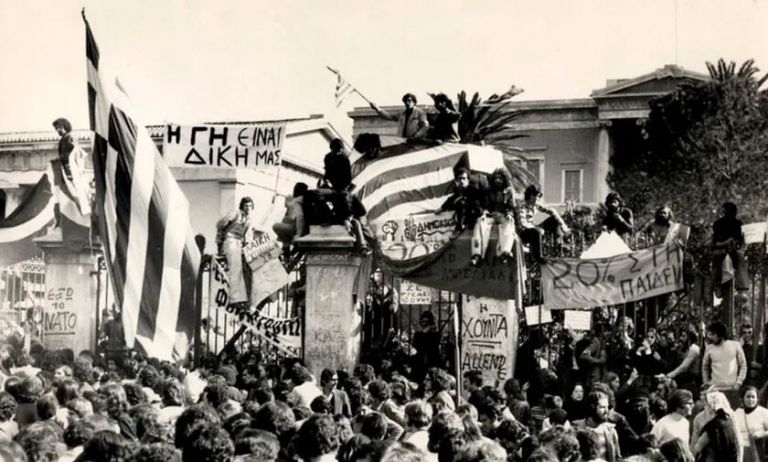 After last year’s annual protest march marking the anniversary of the 17 November, 1973, Athens Polytechnic uprising against the junta was essentially canceled by the government due to the pandemic, participation in this year’s demonstration was massive.

After last year’s annual protest march marking the anniversary of the 17 November, 1973, Athens Polytechnic uprising was essentially canceled by the government – when it had Greek Police issue a decree prohibiting public gatherings of over four people – public participation in this year’s demonstration was massive.

Today’s protest march on the 48th anniversary of the uprising gathered an estimated 25,000 marchers, according to the normally conservative estimate of Greek police.

In the preceding days, citizens young and old, some with their young children visited the old campus of Athens Polytechnic where they laid a flower to honour the dead.

So, too, did President Katerina Sakellaropoulou and Prime Minister Kyriakos Mitsotakis.

For nearly half a century, exponents of the far right have disputed that the junta’s forces killed people, including 17-year-old student Diomidis Komninos, «the boy who braved the tanks»

In spite of the deniers, some of whom built political careers on a lie, there were witnesses to the events of those days.

One of them was the late Dutch Journalist Albert Coerant, who bravely filmed the moment when the junta’s tanks broke down the steel gate of the Polytechnic.

In a tribute to those who stood strong during that one, brief shining moment and even gave their lives for freedom, we are  presenting Coerant’s gripping and sensitive eyewitness account of an exceptionally important historical event of modern Greek history.

THE HEROIC insurrection of Polytechnic students on November 17, 1973 had given hope for the speedy downfall of the dictatorship of Papadopoulos. Yet an even more sinister period began with Papadopoulos’ successor – the new dictator, Dimitrios Ioannidis, head of the military police.

The prison camps of the horrendous exile island of Yiaros were opened again. Arrests and torture became more frequent than ever. Papadopoulos had kept up appearances and always pretended that democratic rights were suspended only temporarily until order would be re-established in Greece. Ioannidis was less circumspect and did not hide his hideous intentions.

The ferocious ESA, the military police, excerpted its terror daily and openly on the streets of Athens and silence reigned among the Greek people, the silence of the grave yard, as people said those days.

During the melancholy weeks after the events at the Polytechnic, a visitor showed up at my office. «Just call me John,» he said. «I heard you have been covering the upheaval at the Polytechnic. Please tell me everything you have seen.»

Since he was a friendly, intelligent man I didn’t refuse. I told him about some of the scenes of the unbelievable courage I witnessed – well known nowadays through numerous newspaper reports and the documentaries shown over and again on TV. I was also able to describe scenes that were not part of public knowledge.

He was fascinated by my account of the Hotel Acropole across from the Polytechnic on that famous day. He heard how I had to shelter from snipers’ bullets in a building which was not only crowded with students but also with school children. He was amazed to hear how the hotel manager himself went around with dishes full of sandwiches and said, «It’s not good to fight for the freedom of our country on an empty stomach.»

He heard too, how despite of the rain of bullets, a young student ventured outside and was hit a few metres from the door of the hotel. I explained how two schoolgirls did not hesitate to run outside like nurses on the battlefield, veritable Florence Nightingales helping the boy and carrying him back into the hotel, only to have a policeman yank him from their hands.

He listened attentively to the story of a Norwegian girl, an unsuspecting tourist, who was hit in the neck from a stray bullet and who lay dying in the lobby of the hotel. She had been on her way to make a phone call to her parents from the OTE building a few metres along Patission Street. She had wanted to tell her parents about her incredible experiences in Greece.

I will never forget the expression on his face when I described the students calling desperately from their loudspeakers for medical help and ambulances. The ambulances with their incessantly screaming sirens arrived – not full of nurses and doctors, but with club wielding, blood-thirsty policemen, some of them even camouflaged in white doctors’ uniforms.

And then the most horrendous and surrealistic scene of all; one which will never leave my mind. The tanks – more than 25 arrived; as if they had to annihilate a well fortified fortress and not a university campus full of unarmed children yelling for freedom. They came rolling in at about midnight. One enormous grey monster stood just in front of the gate of the Polytechnic. From the open turret an officer appeared with a pistol in his hand.

The students begged the army not to use force and not to harm them. The officer shouted down from his tank that the Greek armed forces would not negotiate with anarchists. In the Acropole Palace, children were crying and many were kneeling and loudly praying to God to stop the madness.

One of the most incredible and shameful things was that at this very instant, as the children of Greece were about to die for freedom, in the same hotel, at a short distance from the oncoming catastrophe, a room full of two hundred people, mostly women but also some men, were playing cards, totally impervious to the clamours and weeping of the youth of their country.

My visitor said that his son had been one of the youngsters at the Polytechnic that day, but he was a very modest boy and didn’t like to talk about it. The man asked permission to come again.

During the following visit, he said he felt immensely touched by the heroism shown by the Greek youth during that time. He thought most children were mollycoddled and spoilt nowadays, even in the poorest families. He told me wonderful anecdotes and jokes to illustrate it. «Did you know,» he asked me, «that Jesus Christ was a Greek?» «Really?» I queried, not quite sure whether he was serious.

«Yes,» he replied, a wide grin breaking across his face. «He believed his mother was a virgin and she looked at him as if he were a god. Not only that, he didn’t start work until after he was thirty!»

He related another tale about the sometimes foolish ambitions that Greek parents have for their children. He had a neighbour, a mother with twin boys of about two years old. One day he met her in the street without her children and asked how one of the children were doing. «Who do you mean?» she replied, «the doctor or the lawyer?»

One day my visitor started to talk about his son of 16. He described him as a wonderful boy, and couldn’t wait for the day he would go to university; to the infamous Polytechnic to become an engineer or an architect.

«I am blessed with this child», he added, «he is so clever and studious. But don’t believe he is a monk,» he added, smiling. «He loves girls and the girls love him!»

He showed me a picture of a very handsome boy. Inwardly I smiled at all that praise and thought about the irony of just one more of those doting Greek parents.

My visitor kept coming again and again. He always had parcels in his hands; one day it would be toys to go to a poor children’s home and another time books or an expensive leather jacket for his son. He used to talk about many different subjects; he seemed to be well educated, but the conversation always ended in the same way – with the praise and the glory of his beloved son.

One day his mood seemed different and he kept staring out of the window. I lived next to a cemetery in those days. At last he sighed and said, «We will all go there one day – perhaps it will be my turn soon. Then he snapped out of his apparently uncharacteristic melancholy and exclaimed, «I am happy that my son has still a whole life before him – he is still so young.»

On several occasions I asked why he never brought this wonder boy to visit. «He is too busy studying and flirting with girls,» was his usual reply.

After his frequent visits, my visitor stayed away for a year or two. I started missing him. But suddenly he was there again. This time he was jubilant. His son had passed the entrance examinations for the Polytechnic – with excellent grades. Once again he was carrying parcels and parcels and even an airline ticket in his son’s name.

The youngster was to stay with his American relatives for the summer. There was to be a wonderful party with at least fifty boys and girls attending; he was popular among his friends.

After my visitor left, I went to the book shop to find out his telephone number. I thought I should at least buy a present for his son who seemed like a friend I had never met.
When I rang John’s house, a lady answered and I asked her whether she was the boy’s mother.

«I want to congratulate you and your brilliant son. I heard he has passed all his examinations with flying colours. Your husband tells me he is to become an engineer. May I pass by, just for a short while, to bring him a little present?»

«My son,» she answered in a tone that stifled grief, «will never be an engineer and he will never enter the university; he died three years ago.»

Then her voice drowned in a heart-rending sob. «He was killed by a police bullet, fired at point-blank range at the gate of the Polytechnic on November 17, 1973.»

First published in the Athens News on November 16, 2001, under the title «The boy who braved the tanks». He alone had filmed the tank smashing through the Polytechnic gate. He died in 2013.

* The late journalist Albert Coerant worked as a correspondent for Dutch and Belgian TV in Greece during the military dictatorship.