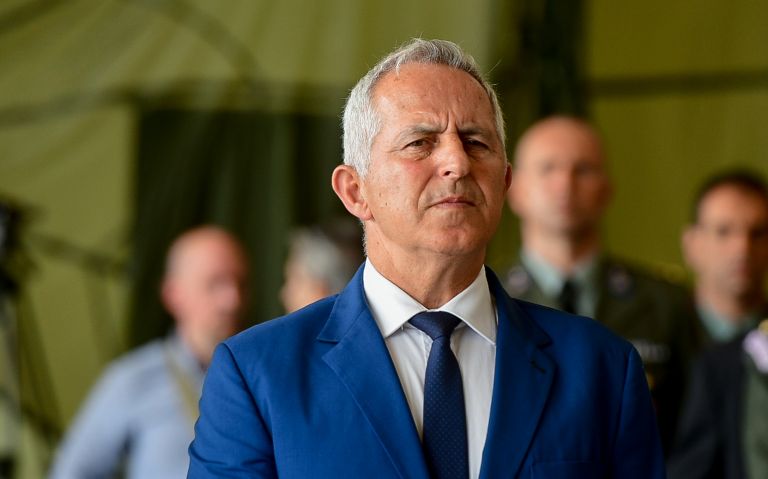 The announcement of Apostolakis’ participation in the new ND cabinet spurred a backlash from the main opposition party as sources say that Apostolakis had discussed his appointment with EX-PM Alexis Tsipras.

The government reshuffle that was announced yesterday was designed to give the government a fresh start after the disastrous August wildfires, yet it was overshadowed by former admiral and former defence minister Evangelos Apostolakis’ last-minute decision to reject his appointment as minister in the newly-created Civil Protection Ministry.

The former Chairman of the Joint Chiefs of Staff, who had served as defence minister under the previous SYRIZA government, following an intense skirmish between the government and main opposition SYRIZA, changed his mind shortly before his planned swearing in yesterday.

The unexpected upset spurred a war between the government and the main opposition and led the PM’s office to fiercely attack Apostolakis.

Neither party nor Apostolakis denied that the Admiral had initially accepted his appointment by Prime Minister Kyriakos Mitsotakis.

The new post-reshuffle government was announced yesterday by government spokesman Yannis Economou. He announced that the former SYRIZA defence minister would serve as the first minister of the newly created civil protection ministry.

The cabinet reshuffle was decided and announced after the disastrous August wildfires that destroyed over 100,000 hectares of forest land.

The announcement of Apostolakis’ participation in the new ND cabinet spurred a backlash from the main opposition party as sources say that Apostolakis had discussed his appointment by the PM with SYRIZA leader Alexis Tsipras.

“Mr Tsipras made it clear that such an appointment, as Mr. Mitsotakis decided it – on the level of impressions and individuals and not of substance as regards the management of the climate crisis – does not constitute an invitation for inter-party consensus but rather an apostasy.”

Apostolakis appears to have assured Tsipras that, “he will not agree under these terms to become a member of a right-wing government”.

SYRIZA charges that afterwards Aposolakis changed his mind “for reasons that he alone knows”.

In an announcement on the cabinet reshuffle, SYRIZA stated, inter alia, that, “Mr. Mitsotakis is honouring the [Mitsotakis] family tradition of apostasy.”

The PM’s father, Konstantinos Mitsotakis, has been blamed for participating in a 1965 palace coup and taking a post in a government that replaced the elected government of Georgios Papandreou. That earned him the moniker of “apostate”.

In the announcement, SYRIZA noted that, “Under the pressure of the resounding failure in managing the wildfires, and after the supposedly streamlined government of the “excellent” allowed half the country to be burned despite the fact there were slight winds, now the government is seeking a life-vest by trying to buy off cadres with state posts under the pretext of a supposed consensus.”

SYRIZA’s announcement was followed by Apostolakis’ statement. Just a few hours before his swearing in, Apostolakis said that he does not accept his appointment as minister because, as he said, he had set as a precondition the consensus of the government and the main opposition.

The term that the ministry should be independent was honoured.

After Apostolakis’ refusal to enter the government, government spokesman Yannis Economou unleashed a harsh attack against him.

“The prime minister, implementing his intention of securing consensus in the critical area of Civil Protection, decided to create a ministry devoted to the management of such issues. He tapped to lead this effort a person with operational experience and bi-partisan acceptance – the previous government’s defence minister and former Chairman of the Joint Chiefs of Staff, Evangelos Apostolakis.

“Over the last days there were preliminary discussions that concerned the object of the new [civil protection ministry] portfoloio. Just yesterday, in a telephone conversation with the PM, Mr. Apostolakis definitively accepted his appointment.”

“That is why today the general secretary of the PM’s office, Grigoris Dimitriadis, contacted the chief of main opposition leader Alexis Tsipras’ office, and Ms Gennimatas (leader of the centre-left Movement for Change – KINAL) was also briefed”.

“After the announcement of the new cabinet, the Office of the President contacted Mr Apostolakis and was informed that [Apostolakis] would attend the swearing in, possibly accompanied by his wife.”

Economou said that there followed a dishonourable announcement from Syriza that characterised Mr Apostolakis as an “apostate” and said he was bought off.

Immediately after that attack, Apostolakis communicated with the PM and told him he does not want to serve as minister.

Mr Economou said it is “truly pitiful that the main opposition targeted in such a vulgar manner a person who may have signalled a national consensus.”

“[SYRIZA] thus torpedoed a great effort to create a national consensus in a policy area that lacks partisan stripes as it aims to protect the paramount value of human life. SYRIZA expresses only division and it demonstrated that today beyond all doubt,” Economou said.
Government spokesman Economou said Apostolakis was “below the call of duty”. “He submitted to his party and backed off from the call to serve the fatherland. It is a pity for his legacy.”

Sources in the PM’s office say that the PM in his first communication with Apostolakis proposed that the latter take the position of Alternate Minister, but that Apostolakis requested that he be appointed minister, and that the PM agreed.

Associates of the PM deny that Apostolakis set the condition that there would be inter-party consensus on his appointment. They say that his dicussion with the PM concerned details on the operation of the ministry and that the two agreed.

They maintain that Apostolakis said, “I will give all that I have and thank you for the honour.”