Felony indictment filed against man for wildfire arson near Kryoneri, north of Athens 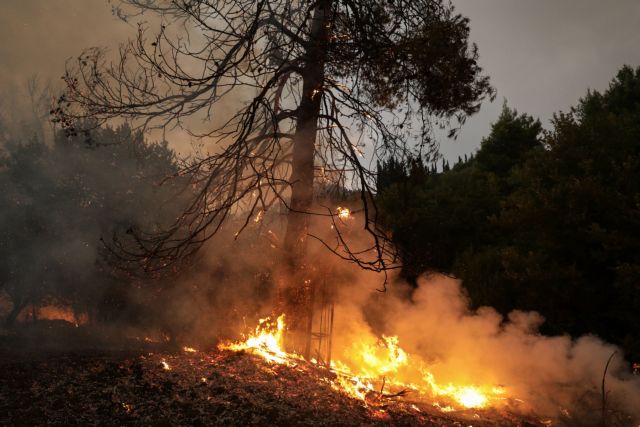 He has already been charged with misdemeanor possession of illegal narcotics, according to reports «recreational drugs» discovered at his residence, along with bootleg fireworks.

A 43-year-old man arrested on Friday evening in a remote field near the wildfire-stricken township of Kryoneri has been charged with a felony count of intentionally causing a forest fire. An indictment charges that the man’s felonious actions were repeated and entailed a danger for human life.

He has already been charged with misdemeanor possession of illegal narcotics, according to reports “recreational drugs” discovered at his residence, along with bootleg fireworks.

Police said volunteer fire-fighters spotted the man riding his motorbike, without license plates, in a remote area, with a fire erupting soon afterwards at a spot 50 meters where no wildfire activity was in progress.

Meanwhile, in a separate incident that occurred at a central Athens park, a woman was arrested outside the perimeter of the Pedion tou Areos park on Friday after passersby claimed they saw her lighting a fire on the other side of the barrier.

Reports on Saturday morning said the woman has been charged with a single count of misdemeanor arson, after she was allegedly found in possession of eight cigarette lighters and two vessels containing flammable liquid.

Other press reports from the previous day claim the woman presented police officers at the scene with an ID card issued in Afghanistan. Authorities are investigating the peculiar incident.

Parks and green-spaces in the greater Athens area have been closed to the public this week.