Kosovo PM Albin Kurti: ‘We would welcome a decision to recognise Kosovo’s independence’

‘Given Greece’s regional weight, as well as the spirit of co-operation in the region, we would welcome the decision to recognize Kosova,’ Kurti told To Vima in an exclusive interview. 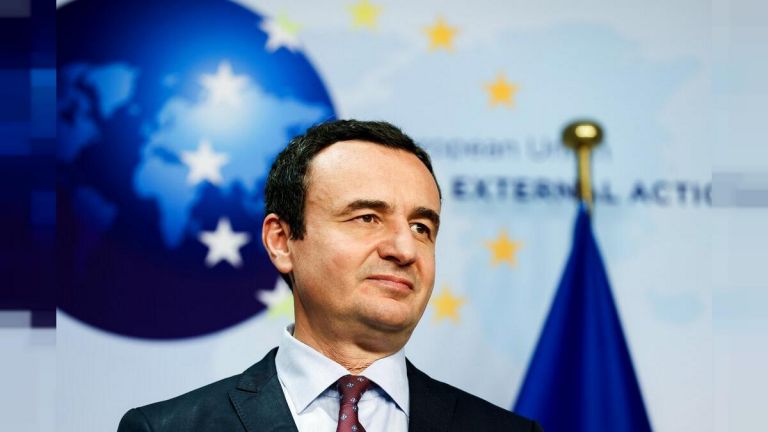 Greece’s recognition of Kosovo’s independence would be a proof that Athens is ready to play a leading regional role in the Balkans, says Kosovo’s Prime Minister Albin Kurti in an exclusive interview with To Vima.

Prime Minister Kurti, who was in Athens recently for “The Economist Conference” and had a brief meeting with Greek Prime Minister Kyriakos Mitsotakis, is clearly against a territorial swap with Serbia and the redrawing of borders in the Balkans. He also stresses that the status of Kosovo has been permanently settled and the dialogue with Belgrade concerns only the future relationship between the two countries.

Kosovo went through an unstable political period with consecutive elections but it seems there is now a stable government. What are your main priorities both domestically and externally? How big a problem is corruption?

We have been focused on two basic and most urgent priorities. The first priority was focusing in managing the pandemic aiming to minimize consequences on the public health. As a result in the last 100 days due to appropriate measures against COVID -19, excellent response from the citizens and massive vaccination the number of new cases have dropped by 99%, the number of active cases by 97% and the number of the hospitalizations by 86%.

In addition our reforms in the justice system, fights against corruption and the preserving public funds have had a positive impact in increasing the citizen’s trust towards public institutions. On the economic front in the first five months of this year we have recorded some very positive and promising results. Our economic activity has been increased by 15%, our budget revenues by 30%, exports by 66% and for this year we project economic growth by 7.9%. We have also designed an economic revival package with 1.1 billion euro contributions to our economy”.

Talks have intensified between Serbia and Kosovo in the context of the Belgrade – Pristina Dialogue facilitated by the EU. Has there been any progress lately in these talks? Is the scenario of land swaps off the table?

Kosova seeks to resolve outstanding issues with the neighbors through dialogue. We will only be able to fix the relations in the Balkans with a principled and well-prepared dialogue, founded on European values. The independence of Kosova is thirteen years old. Since the decision of the International Court of Justice in 2010, which validated the fact that Kosova’s declaration of independence did not violate international law, the debate on states has been closed. I will not discuss the status of Kosova, nor our territorial integrity. It is a settled matter. We cannot permit the revival of failed projects for territorial exchange nor those for the Bosnianization of Kosova. Serbia should now distance itself from the Milosevic regime, and not insist that in some way it continues to achieve the old goals, with new means. The only subject is the relationship between Kosova and Serbia.

The Balkans seem to have returned to the attention of all the big global players and most importantly the United States. However, certain scenarios have been floated after the publication of non-papers talking even about redrawing borders in the region along ethnic lines. How do you respond to those who are concerned about the prospect of a greater Albania? Are you against these scenarios or would you consider them under specific circumstances? Isn’t the prospect of a “Balkan Schengen” a more realistic and constructive cause in order to foster regional cooperation?

I continue to believe that it is best to respond to all these “Non papers” with “No Comment” because through answering them they are trying to come to life. We must move towards European and Euro-Atlantic integration. Kosova has no dilemmas. The EU and NATO are both our values and our destination. Knowing that current regional framework cannot prepare us for EU accession, in Tirana Summit I have proposed that we upgrade CEFTA to SEFTA (South East European Free Trade Agreement) based on the EFTA – EEA model which would elevate the whole region and overcome current obstacles. We certainly hope that European Commission can seriously consider this proposal and start a dialogue that would lead to concrete results. We are convinced that if we walk this path together, then we will be able to address the many challenges and achieve our shared objective.

Recently, Greece’s Foreign Minister Dendias visited Pristina. Your liaison office in Athens has been upgraded but formal diplomatic recognition is still lacking. Are you optimistic this will take place, are you in talks with the Greek side about this? Is there a timeframe?

“We are grateful to Greece for its support and positive attitude towards the Republic of Kosova in the integration processes in both the region and Europe. We highly appreciate the constructive attitude towards our country, which Greece has proved again with the support given in favor of visa liberalization for the citizens of Kosova. Greece needs to be with the people of Kosova and give the hand of support. Greece and Kosova should strengthen their own independent relationship due to the long common history, the common goal of stability and peace in the Balkans and the long common future”.

Aside recognition, what are the main areas in which Athens and Pristina can cooperate both bilaterally and in the region? Do you see Greece as a country which can offer you the necessary technical assistance in your path towards EU integration? Are you concerned that Turkey’s close relationship with Kosovo could hamper cooperation with Greece?

“Kosova wants to build on the historic ties between our peoples and foster long term brotherly relations with Greece, also as an important element of long-term regional stability. We highly value the support of Greece. Given Greece’s regional weight, as well as the spirit of co-operation in the region, we would welcome the decision to recognize Kosova. The recognition would be essential evidence of the regional leadership role that Greece should play. Kosova-Greece economic relations are strengthening. This is evidenced by the virtual economic service organized by the two respective MFAs on April 2021. There is more room for increased trade volume between the two countries”.