The return of Pasok: A ‘Midsummer Night’s Dream’?

Candidates for the leadership are hammering out their strategies, both in public and behind the scenes. KINAL leader Fofi Gennimata has the first word and the key to developments. 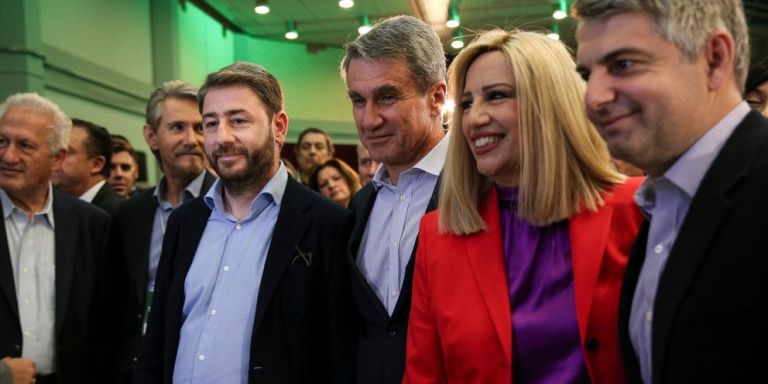 Midsummer Night’s Dream, William Shakespeare’s romantic comedy, is one of the most frequently staged plays in the entire world.

Ever since 2012, the “return of Pasok” to the central political stage is reminiscent of the play, as there were no results on the path to return.

In 2015 we saw the creation of Pasok splinter parties such as KIDISO, top level unions such as Dimokratiki Symparataxi (democratic block). In 2017, Pasok, DIMAR, Potami, KIDISO and others founded Pasok-KINAL.

Formations and movements, personalities and Pasok-rooted organisations to this day have exhausted their limits with a single-digit electoral result. If that continues the revamping of the party will be a Midsummer Night’s Dream.

We are de facto at a new starting point. The road to a leadership change in Pasok-KINAL is without return.

Candidates for the leadership are hammering out their strategies, both in public and behind the scenes. KINAL leader Fofi Gennimata has the first word and the key to developments.

She has made the search for a new narrative a top priority. Andreas [Loverdos] is staging his own leap toward the skies of tomorrow for a new and strong Pasok.

Pavlos Geroulanos is in waiting with his own distinct rhetoric.

Nikos [Androulakis] seems to be playing catenaccio. He is constantly present everywhere, awaiting to make his move in autumn.

Cadres, members, and friends of the world of Pasok are seeking the best possible choice to make the party strong again.

Party organisations are in an incredible inertia. The visits of the party leader set the tone from time to time. Events via internet and the organisational activity of candidates keep the “nervous system” of the party alive.

The aim and ambition of everyone is to bolster the political influence of the party.

Yet the level of electoral support seems unable to exceed the current single-digit result in the polls. Guiding party organs are for the time being in hibernation and the public is taking to the beaches.

The only living, vibrant part of the party is its parliamentary group, that must always be on top of things, but MPs are keeping their cards close to the vest. The statements of Gennimata and party announcements get slight attention from the press.

Talk of snap elections has begun to gradually and slowly (not systematically) capture the attention of the press. Public debate is dominated by the monologues of New Democracy and SYRIZA and the party’s communications capacity is limited. The political time left for a substantial dialogue with society is running out.

Without public dialogue, society usually turns its back on parties. In that case there will be small participation at the polls. The effort to renew and reconstruct the party will sink in the shallow waters of old hat.

All things considered, the wager is whether the “return of Pasok” to the central political scene is feasible or whether that ambition is a Midsummer Night’s Dream.

Candidates for the party leadership are seeking a word or slogan to express the party’s new profile which can mobilise people to act collectively.

Christ performed miracles to persuade his disciples. Today, miracles do not happen. Prospective leaders must hear the needs of the state and of citizens and put their “finger into the print of the [Christ’s crucifixion] nails” publicly and clearly. It must not be lost in party gossip about who supports whom and who has the strongest political machine. The identity of the party must be clear and unified and not just a gathering of personalities from different organisational groupings. Collaborations have exhausted their utility.

Whether Pasok will make a comeback as a powerful force that can change political balances in Parliament will be judged by society. The new leader must signal a personal political mark. The leadership group must co-fashion the new Social Contract along with the members and friends of the party.

One may reply “what is all this” about theoretical approaches about a prospective return of Pasok to the centre-stage. It seems like a joke. Here, the world is being battered with heightened economic and social problems and you are writing about revolutions in parties of the centre-left, or social democracy in Pasok, one might say.

Yes! I believe there is a social and political need for new alternative proposals for managing our common affairs. One need only tune into the social needs and challenges of the post-COVID era. You have to deal with the lives and work conditions of citizens and with the media that kept our economy alive in the difficult years but do not see light at the end of the tunnel.

One need only highlight the great problem of the centralisation of power and the weakening of central institutions of democracy. One need only table proposal proposals that can offer realistic solutions to problems.

The mobilisation of would-be party leaders can and should attract attention and stir a debate in society on these issues. The hope for a better tomorrow must remain alive. We must discuss issues that concern our democracy as the form of government of the many and not of the select few.

The quality of party democracy influences in a positive or negative manner the democracy of our state. Strong, collective subjects (political and social) are shaped through collective efforts and actions.

“Byzantinists” and “screenwriters” who blame the weakness of KINAL on third parties do not help the return of Pasok. The party gossip about what George, Kostas, and Vangelis are doing is of no interest whatsoever to citizens anxiously trying to resolve their problems.

We are already well acquainted with the candidates for the party leadership, but they have not revealed their political agenda even as political time rolls by. The battle cannot be won in political gossip columns.

The interest of society and of party members and friends will become more intense if the political dialogue on the overarching issues of our era flares up.

Only public dialogue can persuade and activate democratic and productive forces in a new political project to change political balances. The interest of democratic voters will be intense if alternative proposals for the management of state power and for the organisational-political identity of the party are tabled. Citizens will rally if the social and economic wagers are addressed with political positions that can be a model for a new, unified Pasok.

The road to a political return is rough and rocky. Interests and stagnant situations are threatened. The accomplishment and offering of Pasok to public affairs can withstand comparison to that of any other, prior ruling party.

With a view to tomorrow and the new challenges and changes in production and society, Pasok can contribute decisively to social and institutional reforms that can provide solutions that can stand the test of time.

Social Democracy in various forms is a way of life and a predominant feature is social cohesion and the prosperity of citizens. To win that wager, one needs a strong productive base and sustainable development.

Pasok’s 30 years in power offered many works and examples of social democratic policies.

With new intellectual tools, ideas, thoughts, and proposals along with collective actions, Pasok supporters can tip the political balances.

The spirit of unity and collective action can establish that and it should be internalised by new candidates for the party leadership. Only then will the effort stop being a Midsummer Night’s Dream.

Otherwise, the political history of Pasok will be a mere memory. The candidates must understand that they are the bearers of a final opportunity for the return of Pasok as a party that can make a serious bid for power.

I fear, however, that they are still preoccupied with power within the party. If that mentality does not change in favour of collective action, the project will lead to a shipwreck in shallow waters.

This is perhaps the last chance for a Return of Pasok as a party of power that can shift political balances in our country.