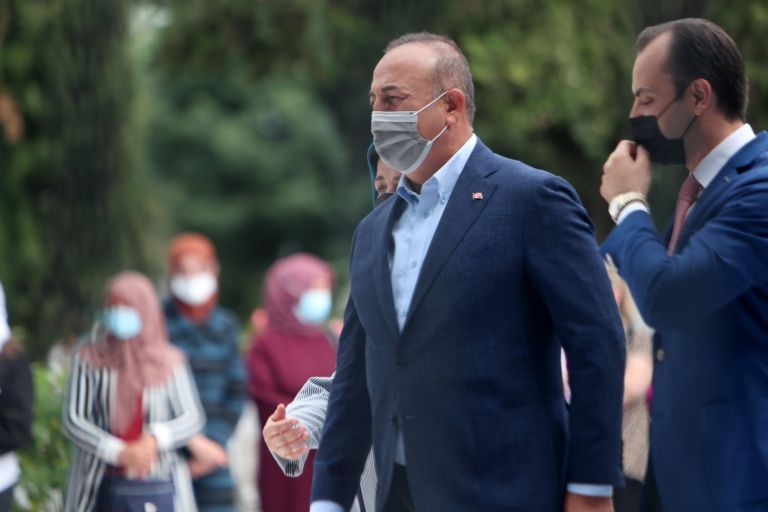 Turkey’s continuous efforts to distort reality, as well as its claims alleging lack of protection of these citizens’ rights or discrimination, are unfounded and are rejected in their entirety.

When Turkish ministers visit Thrace, there are always concerns about references to a Turkish minority in the region, even though the Lausanne Treaty defines the minority as a religious one.

Turkish Foreign Minister Mevlut Cavusoglu’s five-hour visit to Thrace today naturally once again included references to a “Turkish minority”, including during his visit with the two illegal muftis of Thrace.

Cavusoglu will meet with Prime Minister Kyriakos Mitsotakis with whom the agenda includes a 14 June Erdogan-Mitsotakis meeting on the sidelines of NATO’s summit.

The Muslim population is comprised of people of Turkish, Roma, and Pomak ethnic lineage, and Turkish proxies in Greece and the Turkish consulate in Komotini have over the years been known to aggressively push for the Turkification of the entire population.

Greek foreign ministry spokesman Alexandros Papaioannou issued a stern written statement on the legal status of the Muslim minority and the Greek state’s respect for its rights. The text is as follows:

“Greece, being a state governed by the rule of law, remains firmly committed to International Law and the protection of human rights.

Greece fully implements its obligations under the Treaty of Lausanne, which explicitly and clearly refers to a Muslim minority in Thrace.

Turkey’s continuous efforts to distort reality, as well as its claims alleging lack of protection of these citizens’ rights or discrimination, are unfounded and are rejected in their entirety.

Greece would welcome the improvement of its relations with Turkey. However, the respect for International Law is a prerequisite.

We call on Turkey to respect these fundamental rules, including the Treaty of Lausanne, which it has also signed and is obliged to implement.”