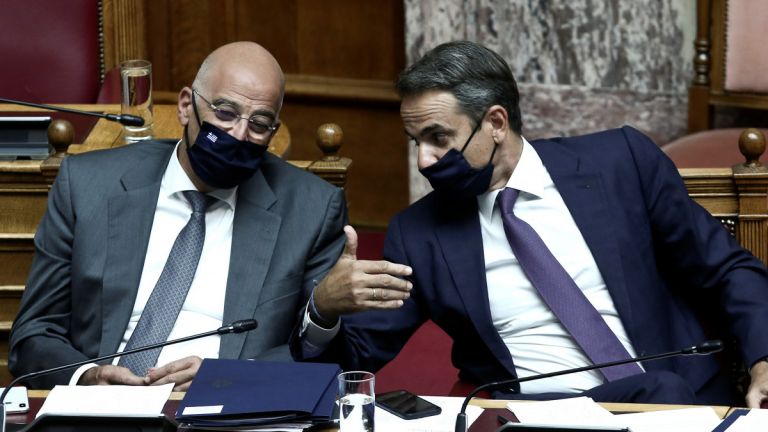 Greece has slammed Turkey over its move to encroach on Athens’ search-and-rescue area after Ankara claimed jurisdiction over half of the Aegean.

At the same time Athens launched a diplomatic blitz seeking the backing of allies and the UN and filed a strong demarche in Ankara,

After Ankara’s move to extend its search-and-rescue area in contravention of international agreements Greece is poised to call on the EU to suspend its customs union with Turkey, an extreme move that would be the strongest possible sanction against Ankara but which has an extremely slim chance of approval.

At the same time Dendias submitted a request in a letter to three of his EU counterparts – German Foreign Minister Heiko Maas, Spanish Foreign Minister Arancha Gonzalez-Laya, and Italian Foreign Minister Luigi Di Maio -requesting that their countries impose an arms embargo on Turkey and detailing Turkey’s most recent provocations, which he said aim to create an illegal, de facto situation on the ground that violates Greece’s sovereign rights.

At the same time, government spokesman Stelios Petsas blasted Ankara over a move that Athens views as the greatest Turkish provocation to date.

«Ankara, with a new move that is added to the successive provocations of the recent period has proceeded to unilaterally and arbitrarily redefine and extend the boundaries of its area of responsibility for search-and-rescue in its jurisdiction. This decision is clearly illegal as it overlaps with areas under Greek jurisdiction but also under Greek sovereignty,” Petsas told journalists at his daily news conference.

«It is not based on operational criteria and does not serve purposes linked to the safety of human life. It is in direct conflict with international legality and does not produce legal results,» added Petsas.

Ankara has for years challenged and and has attempted to encroach on Athens’ search-and-rescue area on the ground but never in such a formal and sweeping manner.

The government spokesman underlined that the Greek area of jurisdiction for search-and-rescue – which coincides with the Athens Flight Information Region (FIR) – has been defined since the 1950s and was submitted to the competent international maritime organisation in 1975.

He said that Greece, via its unified rescue-and-rescue centre in Piraeus, effectively coordinates all search-and-rescue missions within Greece’s area of responsibility, offering its services to all the vessels and aircraft that may be in danger.

Petsas noted that the last EU Summit in its conclusions repeated EU leaders’ unanimous demand to Turkey to stop the provocative actions in the Eastern Mediterranean reiterating the need to respect UN Security Council resolutions.

He also cited the previous EU Summit’s conclusions which refer to specific articles on the imposition of sanctions.

On the pandemic, the government spokesperson underlined that many European Union leaders expressed great concern at the last EU summit over the sharp increase in cases, the number needing breathing support and deaths over most of Europe.

Petsas said that for the more effective protection of the borders, another 400 permanent border guards will be hired and go on duty immediately, while another 800 will be sent to the eastern Aegean islands and another 480 to the rest of the country. In a year’s time, he added, a total of 1,680 border guards will be deployed at all points