In an exclusive interview with To Vima on Sunday, Alavanos unleashes vitriolic criticism of his former protégé and of the party he now leads as the most poisonous enemy of the Greek Left, 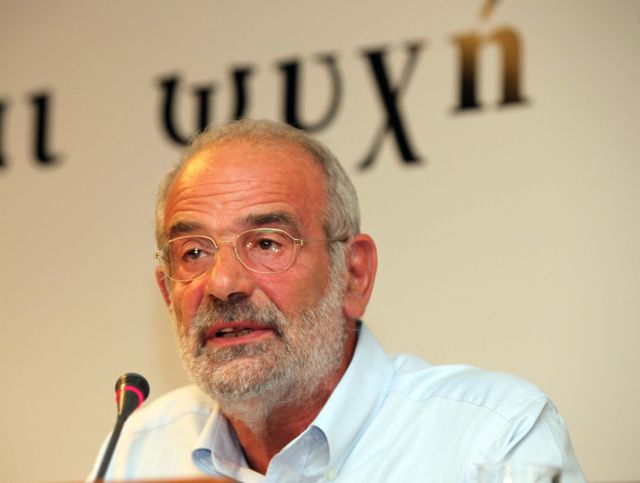 Alekos Alavanos is the politician that made Alexis Tsipras the leader of SYRIZA, tapping him for the party’s top job, which he won by trouncing veteran party member Fotis Kouvelis (now alternate defence minister).

Their relations were strained even before their complete rupture, after Tsipras ignored the result of a July, 2015, referendum that rejected the bailout memorandum that was on offer from the EU back then. He subsequently signed the third bailout memorandum.

In an exclusive interview with To Vima on Sunday, Alavanos unleashes vitriolic criticism of his former protégé and of the party he now leads as the most poisonous enemy of the Greek Left, with which it retains strong ties, as he concedes.

Alavanos issued a call for a unified front of the non-communist left, with an alliance between his 1-1-4 Initiative (a reference to the old provision of the Constitution that its enforcement depends on the patriotism of citizens when democracy is imperiled), former parliament speaker Zoi Konstantopoulou (Tsipras’ most outspoken left-wing opponent) and Yanis Varoufakis, who has said that he will be a European Parliament candidate in the spring elections.

The 1-1-4 initiative is comprised of leftists, centrists, Greens, academics and authors.

Alavanos charged that before the elections Tsipras “offered ribbons and lollipops hoping to lure the electorate”, and said that SYRIZA is “the most poisonous opponent of the Left”.

The ex-SYRIZA leader charged that SYRIZA is cultivating a “cesspool environment” through scandal-mongering and by diverting the public’s attention from real socio-economic problems.

Alavanos said that the social benefits and handouts announced by Tsipras are a pittance in comparison to wage and pension cuts and the disastrous effect of over-taxation. He supports the abolition of the ENFIA real estate tax (as Tsipras did before coming to power, when he trashed the pledge) and criticises the minor pension increases for some retirees as deceptive, and too little too late.

Alavanos said he has in the past also supported a return to the drachma, as only the national currency and the ability to devalue it could help spur an economic recovery.

“SYRIZA is advertising a 20-euro monthly pension hike when it has cut the 200 euros of the EKAS stipend which poor pensioners received until recently. Take the ENFIA tax. The government is advertising a 30 percent cut, while for most property owners the reduction will be minimal or non-existent. All these moves represent the traditional identity of two-party predominance,” Alavanos said.

Asked what the government should have done, he listed a number of fiscal measures.

“Our country’s fiscal policy needs to make a radical turn with the immediate abolition of primary surpluses and of Brussels’ suffocating fiscal discipline. One needs the immediate abolition of ENFIA, a substantial VAT tax cut, and the bold bolstering through salaries and pensions of the buying power of citizens in order to revive the market and bolster public investment, so that along with the private sector it can reconstruct the economy,” Alavanos proposed.