Government: Greece ‘takes back its history” through accord with FYROM

Skopje will receive invitations to join Nato and start EU accession talks only after its parliament ratifies the agreement, and it can join these organisations only after it amends its constitution. 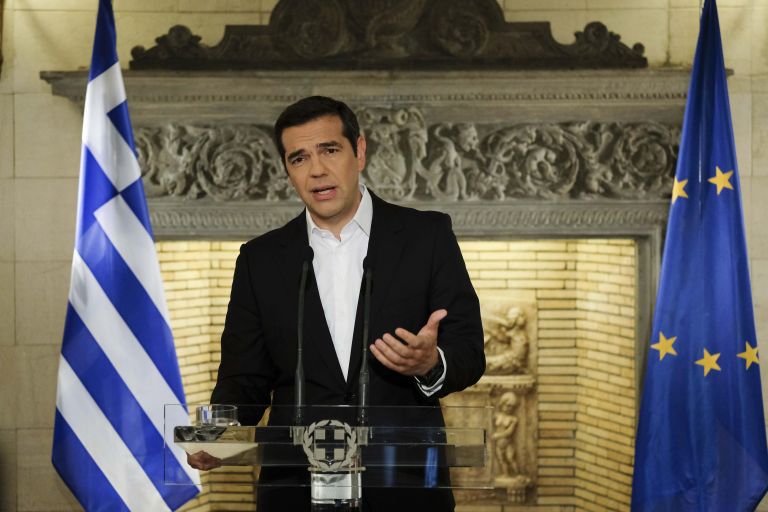 Share
The government has said that through the FYROM naming settlement and the new name “Severna Makedonija” Greece is “taking back its history, the history of ancient Macedonia which previous governments of the neighbouring country had expropriated”.
In a non-paper issued after PM Alexis Tsipras’ televised address yesterday evening, the government said that it managed to resolve an issue that bedeviled Greek diplomacy and society for over 25 years.
A postponement of the solution would have destabilised FYROM with repercussions on Greece’s security, and would bolster the role of third powers [an apparent reference to Turkey and Russia] on Greece’s northern borders, the non-paper stated.
The government maintains that the agreement fully meets Athens’ longstanding national position – a solution offering a composite name with a geographic marker, for use in all circumstances – international, bilateral, and domestic.
It also maintains that Skopje’s adoption of the name Severna (Northern) Makedonija puts an end to the irredentism inherent in the current name, Republic of Macedonia, which implies a claim to all of Macedonia.
The agreement requires that Skopje proceed immediately with a constitutional revision, and this a “huge victory for Greece”, the non-paper noted, adding that that this is the first time any country has agreed to amend its constitution based on an international accord.
Greece will ratify the agreement only after FYROM changes its constitution to include the new name and remove irredentist references.
Skopje will receive invitations to join Nato and start EU accession talks only after its parliament ratifies the agreement, and it can join these organisations only after it amends its constitution. The invitations will stipulate that they are null and void if the constitutional revision is not carried out.

Skopje in the agreement also accepts the distinction between its people (with their linguistic and cultural characteristics) and the “Greek Macedonians, their ancient culture, their language, and the area in which they lived”, the non-paper underlines.