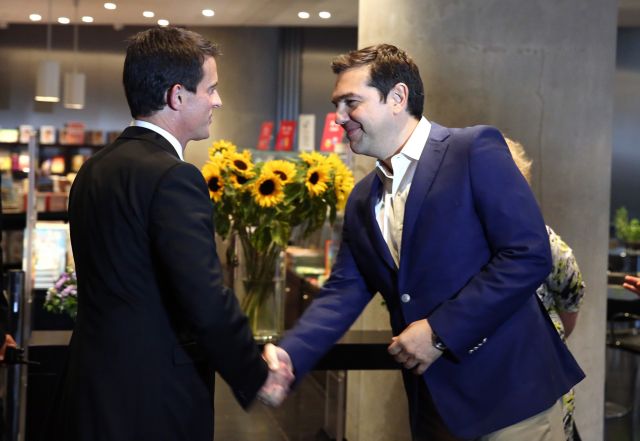 The French Prime Minister Manuel Valls was received by Greek Prime Minister Alexis Tsipras at his office at Maximos Mansion on Friaday morning. The two Prime Ministers made public statements after extended talks and
signed a road map for the strategic relation between Greece and France.

“Your visit to Greece, following the visit of President Hollande at the end of last year, confirms the very close working relationship and mutual understanding between our countries” announced PM Alexis Tsipras as he welcomed French counterpart Manuel Valls at Maximos Mansion.

PM Tsipras further noted that “Greece and France share common values and many times in our common European course we have defended the democratic acquis of our people and the vision for a Europe of social cohesion” added that the two countries will “continue this common history, this common course”.

The French Prime Minister responded that “if we supported Greece to stay in the Eurozone and if we supported the courageous reforms it was because Greece is in the heart of Europe” and stressed that “Greece is necessary both for France and Europe”.

Later on in the day, the French PM will meet with the President of New Democracy Kyriakos Mitsotakis. The French Minister of Finance Michel Sapin will also attend this meeting, which will be held at the French ambassador’s residence.

On Thursday the French PM met with the President of the Hellenic Republic Prokopis Pavlopoulos and pledged France’s support towards Greece. Mr. Valls underlined the importance of Greece in relation to the refugee crisis and stresses that EU’s top priority is to secure the borders and end the conflict in Syria.