Trilateral talks between Greece, Cyprus and Egypt under way

A trilateral summit meeting between Greece, Cyprus and Egypt is scheduled for 11:30 on Wednesday morning at a central hotel… 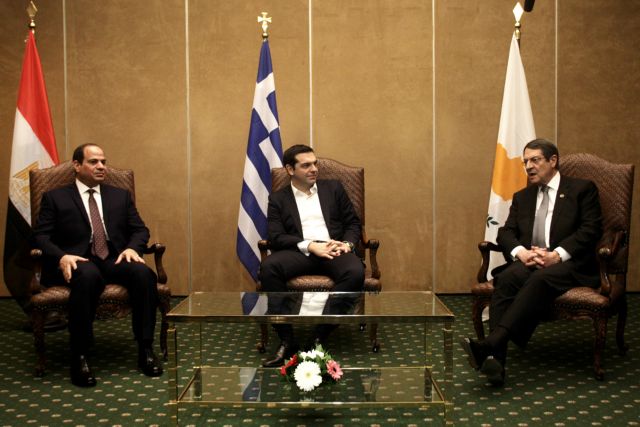 A trilateral summit meeting between Greece, Cyprus and Egypt is scheduled for 11:30 on Wednesday morning at a central hotel in the city center of Athens. Prior to the meeting, the Egyptian President Abdel Fattah el-Sisi met with his Cypriot counterpart at 9 and then with Greek Prime Minister at 10. A press conference will follow the trilateral summit meeting.

The Greek PM Alexis Tsipras referred to the strategic importance of the cooperation between the three countries, arguing that they are pillars of stability in a broader region which is destabilized. He also expressed his hope that this stability provided may contribute towards a fair and sustainable solution for the Cypriot dispute.

The President of Egypt arrived in Greece on Tuesday and met bet with both PM Tsipras and Greek President Prokopis Pavlopoulos. The Egyptian President underlined the need for closer cooperation in order to face the terrorist threat and to develop financial ties.