The President of Parliament Zoi Konstantopoulou lashed out against the Governor of the Bank of Greece Yannis Stournaras, over… 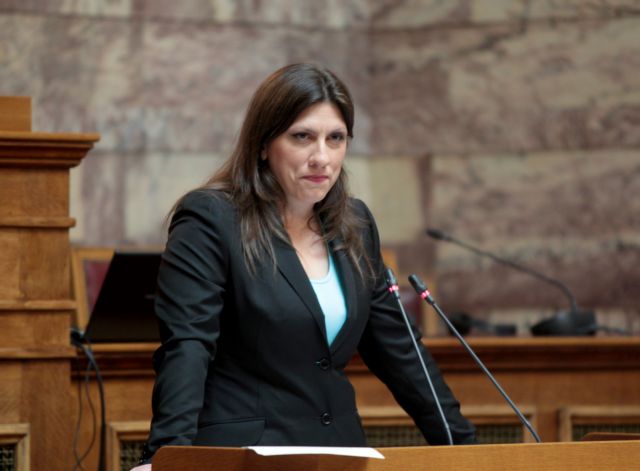 The President of Parliament Zoi Konstantopoulou lashed out against the Governor of the Bank of Greece Yannis Stournaras, over the Monetary Policy report that as submitted in Parliament on Wednesday.

During the session of the Parliamentary Committee investigating the bailouts, Mrs. Konstantopoulou stated that Mr. Stournaras “surreptitiously submitted the report” on a USB stick during the committee proceedings to undermine the process. Furthermore, she returned the report as “unacceptable”, adding that Mr. Stournaras’ actions were “unacceptable, an attempt to intervene in the implementation of public mandate and the operation of Parliament”.

Furthermore, Mrs. Konstantopoulou was critical of Mr. Stournaras’ stance in the ECB board meetings, while arguing that the Governor refused to provide Parliament with necessary date to carry out a full audit, who claims that the banking data on the funds that were meant to be given to Greece is “top secret”. The President of Parliament accused Mr. Stournaras of undermining transparency and the Democracy.

The assault against Mr. Stournaras carried on by SYRIZA’s spokesman in parliament, Mr. Thanasis Petrakos, who urged the Parliamentary Committee of Institutions and Transparency to summon the Governor on Friday, in order to “explain everything he has done”. Mrs. Konstantopoulou responded that Mr. Stournaras’ “brutal intervention” must be thoroughly examined and revealed that the committee would discuss the issue.

SYRIZA’s press office also issued a statement, arguing that the Governor of the Bank of Greece is not only acting beyond his institutional duties, he is actively working towards undermining the negotiation efforts of the Greek government, when he should be focusing on securing the stability of the domestic banking system.

The attack, as expected, prompted fierce reactions from the opposition parties, with New Democracy spokesman Konstantinos Karagounis demanding that the Prime Minister intervenes and take action against “the trivialization of Parliament and vilification of institutions” by Mrs. Konstantopoulou.

Similarly, the River accused the President of Parliament of taking up “recipes from the dark past” and argued that in this critical moment the country is in need of allies and a national consensus. The River also stressed that the warnings issued by the central banker are very serious and must not be ignored.