Samaras announces that the ailing Greek economy is finally «restarting» 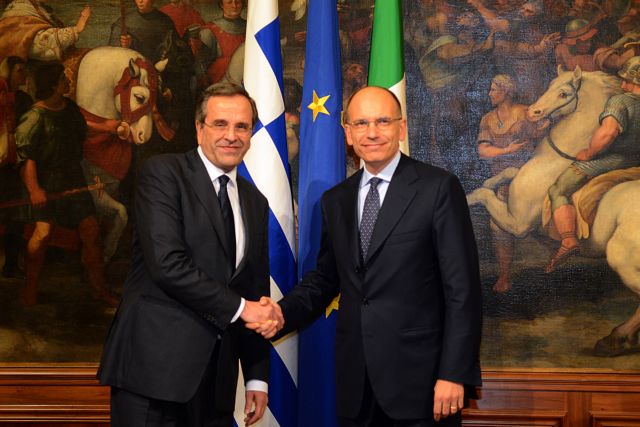 The Prime Minister Antonis Samaras visited Rome yesterday, where he met with his Italian counterpart Enrico Leta. During the press conference, Mr. Samaras stated that the Greek economy is “restarting” after years of suffering from the crisis and on the path to growth.

Mr. Samaras explained that despite seeing the GDP drop by 25% and wages by 40% in the past six years, the country has managed to stabilize and produce a primary surplus. Mr. Leta commented that the EU’s future is dependent on growth, while recognizing Mr. Samaras’ efforts and achievements to that end.

During their meeting, the two Prime Ministers agreed to create a joint working group that will coordinate the two government in their upcoming EU presidencies in 2014. Furthermore, the two leaders will combine their efforts to tackle the illegal immigration problem at the upcoming European Council (24th and 25th of October).

In light of the recent tragedies at sea, the Italian PM expressed his hope that illegal immigration is dealt with effectively, rather than superficially. To that end he explained that a reevaluation of asylum is necessary, while Frontex requires further support. Eurosur, the European border patrol system, is scheduled to go online on the 2nd of December.

Mr. Samaras added that the tragedies of illegal immigration are not just restricted at sea, but also when the people reach land. The Greek PM asserted that local communities cannot integrate these “people without a future or past” from countries plagued by armed conflict and financial problems without experiencing a destabilization.

The Greek PM’s associates explained that this is the first time that Malta, Italy and Greece have cooperated to tackle the illegal immigration problem as a “threat” to the stability of each country. Furthermore, Europe has the opportunity to come up with a real solution, for a real problem in real time.