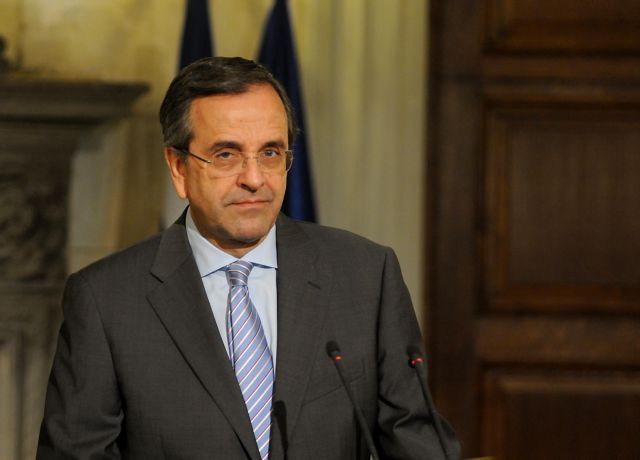 The tripartite government’s future remains unclear, with the coalition being shaken to its foundations a year after being created. The last political earthquake, caused by ERT, has created deep cracks that are hard to close. The developments are unpredictable and the situation is critical. Mr. Samaras’ decision to shut down ERT has triggered unprecedented reactions both domestically and abroad.

The most spectacular objection to the Prime Minister’s decision was by voiced the President of Democracy, who disagreed with the shut down and believes that ERT can stay on the air while its reform takes place. In this environment of conflict, the Prime Minister’s relationship with his two government partners Evangelos Venizelos and Fotis Kouvelis has suffered dearly.

The three partners are one step before a full-blown conflict, a development that would cause a monumental shock to the country’s political system. This is also the first time that the Prime Minister’s method of operation is openly questioned.

These are crucial moments for a country going through a tough period, while the implementation of the bailout package is problematic (privatizations are in jeopardy, bailout-mandated agreements are not implemented etc)

A lot will depend on the Monday afternoon meeting between the political leaders, the most important meeting of the past year. There will either be a major, honest compromise between the government partners, or they will lead the country to early elections, amidst an intensely-polarized climate, which can create a very problematic political environment. Elections could make things significantly worse.

What is certain is that the relations of the government partners have been shaken. After the latest developments, there is a lack of trust and increased suspicion amongst the three partners.

The Prime Minister’s decision to show down ERT despite the objections of Venizelos and Kouvelis during their meeting at Mr. Samaras’ home has dramatically exacerbated their relations. The PASOK and DIMAR leaders are furious at Mr. Samaras, who maintains he did the right thing and operated democratically, while claiming that Mr. Venizelos and Kouvelis were aware of the ERT shutdown.

All that remains is for the Prime Minister to compromise and sign a new deal with the other two partners for a fresh start, while the policy for ERT will be that “ERT has shut down once and for all and a common ministerial decision cannot be revoked”. Venizelos and Kouvelis believe that this fresh start cannot occur in the current climate and the government’s goals and framework of operation must be redefined, whatever that might entail.

The Prime Minister is called to demonstrate the ability to synthesize during the meeting and reverse the negative climate to avoid completely destroying the fragile government cohesion. Mr. Samaras’ is likely to suggest alternative option, which are currently being worked through, in order solve the problem.

In preparation of the meeting, the Prime Minister’s close associate, the Minister of State Dimitris Stamatis, has already spoken to Mr. Venizelos twice and met Mr. Kouvelis in order to discuss a compromise for ERT. Both refused, claiming that the only solution is for ERT to operate as normal and then discuss a reform plan.

The Prime Minister denies the allegation that it was an authoritarian move and claims that both Venizelos and Kouvelis had been aware for some time about ERT’s closure. He is not against compromise and finding a common solution, even though PASOK and DIMAR accuse him of authoritarianism. Despite the rumors of early election, Mr. Samaras is not considering them, while PASOK and DIMAR report that while they do not wish elections, they are not afraid of them.

Meanwhile, the Prime Minister’s associates discount the rumors that PASOK and DIMAR executives are working towards installing a new Prime Minister, perhaps even extra-parliamentary. Mr. Samaras’ associates assert that only he is able to ensure unity and government operation.

The ERT case triggered many reactions that the Prime Minister was unable to predict. Reactions were underestimated, ERT’s symbolic value disregarded and suddenly the Prime Minister found himself apologizing for a decision that caused more damage than good to everything Mr. Samaras personally invested in over the past few months.

Once again, the Prime Minister accepted proposals by his close partners that were not worked through. The latest positive messages gave Mr. Samaras the illusion of a ‘golden opportunity’ to go through with radical changes that never took place since the regime change, so that he could present himself as the grand reformer.

The Prime Minister’s office did not estimate that the reactions of Venizelos and Kouvelis could jeopardize the government’s unity. Mr. Samaras and his associates such as Messrs. Stamatis, Bouras, Lazaridis and Mouroutis etc all believed that the Prime Minister’s decision would go through unopposed. After all, they had studied to “secret” polls that showed that a huge portion of the people (62% in the first and 73% in the second) were in favor of an ERT reorganization.

As a sign of good will, the Prime Minister made a proposal on Friday so that public television returns. Under the principal that ERT has ceased to exist, Mr. Samaras proposed that the special liquidator appointed by the Minister of Finances appoints a temporary committee, supported by all parties.

Mr. Samaras explained that the goal is to hire a small number of employees, in order to begin transmitting as soon as possible. The Prime Minister insists that the bill for creating a new public broadcaster can be voted in next week. From the stand of the 9th ONNED Summit on Friday night the Prime Minister explained that he expected the “the reforms will continue with the same fervor and we will not accept blackmail”.