Osborne: ‘Deal to be done’ on sharing Parthenon Marbles

‘They are the supreme symbol of nobility. They are a tribute to democratic philosophy. They are our aspiration and our name. They are the essence of Greekness,» Melina Mercouri had declared. 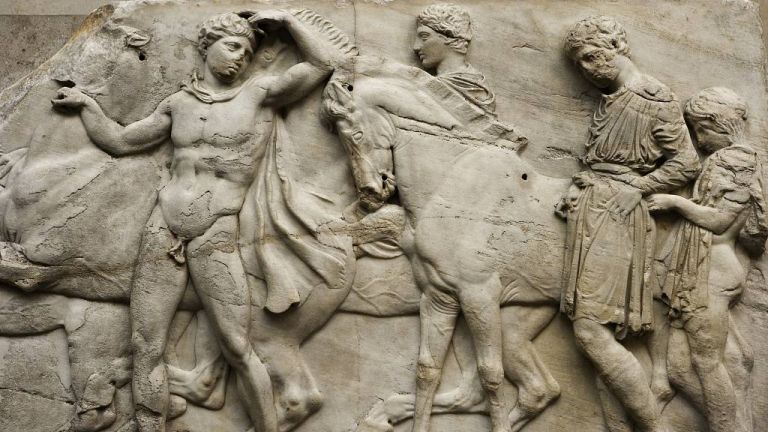 In a possible historic breakthrough in Greece’s decades-long campaign to return the Parthenon Marbles from London to their original home in Athens, British Museum chief George Osborne has said that “there is a deal to be done” between the museum and the Greek government that could lead to the Acropolis Museum in Athens receiving a portion of the sublime sculptures hacked off the Parthenon by Lord Elgin.

Speaking to the UK’s LBC news outlet, Osborne, who served as Chancellor of the Exchequer from 2010 to 2016 and recently noted he would have voted to save Boris Johnson (suggesting a potential deal may garner the support of the British PM), said:

“The Elgin Marbles, the Parthenon sculptures, they’re an amazing testament to human civilization. In the British Museum, they tell a story about civilization compared to all the other civilizations, China, India, other parts of Mediterranean. In Greece, they tell the story, just Greek civilization.”

Mitsotakis’ campaign for return of sculptures

Prime Minister Kyriakos Mitsotakis has privately and publicly called upon Johnson to return the sculptures, and he also made Greece’s case in his 17 Μay address to a Joint Session of the US Congress.

Mitsotakis has also in the past proposed loaning some of Greece’s most important antiquities that have never left the country to the British Museum as an incentive to return the Marbles.

All Greek governments since that of Andreas Papandreou, in which Mercouri served, have demanded the return of the sculptures.

Moreover, opinion polls over the years have also shown that a majority of Britons favour the return of the Marbles.

Though the return of the sculptures has always been viewed as a political decision by Greece, British governments over the years –including Johnson’s – have always adopted a formalistic approach, maintaining that they legally belong to the Trustees of the British Museum, who now, however, appear to be open to discussing a potential split of the unique treasures between Greece and the UK.

The late film actress and culture Minister Melina Mercouri began a public campaign on behalf of the Greek government for the return of the sculptures in the 1980’s, but she had brought world attention to the injustice much earlier, and made the demand a life-long crusade.

Asked by LBC’s reporter Andrew Marr if he means «you would move some of them to Greece at last for a while, and then back to London», Osborne replied, «That kind of arrangement. Sensible people should come up with something where you can see them in their splendour in Athens, and see them among the splendours of other civilisations in London».

Yet it is hard to imagine that the Greek government would turn down such a deal or that the British Museum or the UK government would demand their return once they are placed and exhibited in the ultra-modern Acropolis Museum, which was built to house them one day, at the foot of the Acropolis with a view of the site.