Karolos Papoulias has passed away 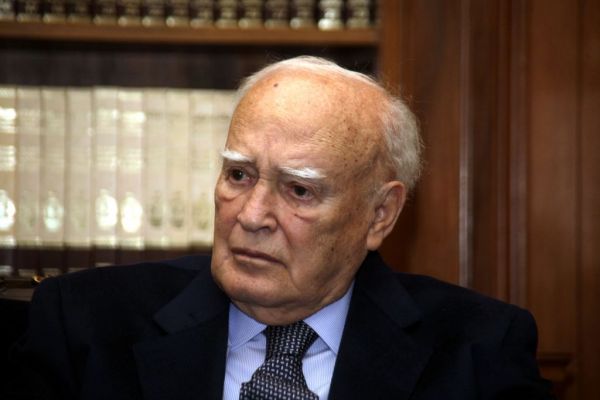 He was born in the village of Molyvdoskepastos, in Ioannina, and he was the son of  the Major General, Grigorios Papoulias. He graduated from the Law School of Athens. He completed his postgraduate studies at the University of Milan (Public International Law and International Relations) and then he received his PhD from the University of Cologne (Private International Law). His doctoral dissertation was entitled: “Erwerb und Verlust des unmittelbaren Besitzes im griechishen und deutschen Recht” (“The acquisition and loss of  ownership under Greek and German law”).

Regarding his political career, in 1974, he joined the Panhellenic Socialist Movement (PASOK) party and he was a MP for Ioannina for 26 years (1977-2004). In the first government formed by Andreas Papandreou, Mr. Papoulias was appointed Deputy Foreign Minister, a position he held until 1984, when he was later promoted to Deputy Foreign Minister. In the period 1985-1989, he served as Minister of Foreign Affairs, while in the coalition government under the Prime Minister, Xenophon Zolotas, in 1989-1990, he served as Deputy Minister of National Defense.  From 1993 to 1996 he served as a Minister of Foreign Affairs, until the resignation of the Papandreou Government, in view of the election of Kostas Simitis to the post of Prime Minister. Finally, he was chairman of the Parliamentary Committee on National Defense and Foreign Affairs.

On December 12, 2004, he was nominated by the Prime Minister, Kostas Karamanlis, for the office of President of the Hellenic Republic. The Panhellenic Socialist Movement (PASOK) party was also in favor of this proposal. In the first ballot held in Parliament on February 8, 2005, Mr. Karolos Papoulias was elected President of the Hellenic Republic from the first round with 279 votes. On February 3, 2010, Μr. Karolos Papoulias was re-elected as the President of the Hellenic Republic with 266 votes out of a total of 298 voters. The Parliamentary Groups of the Panhellenic Socialist Movement (PASOK), New Democracy (ND) and Popular Orthodoxy Rally (LAOS) voted aslo in favor of this proposal. As a result, he became the third President to be re-elected for a second term. Mr. Karolos Papoulias is married to Mary Panou and has three daughters.