Who won the debate between the candidates for the KINAL party leadership? 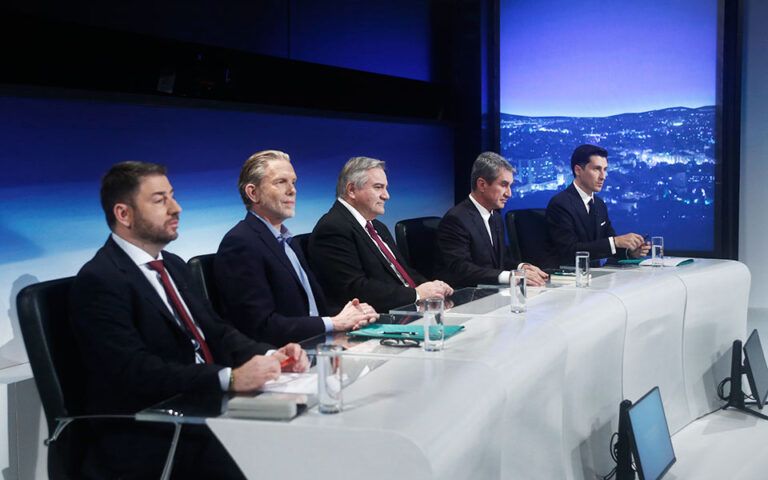 The first answer to the question who won the debate came from the social media. There are no posts that refer to any candidate as the winner or to a memorable turn of phrase by any of them in an attempt to corner his opponents.

Who won the debate between the five candidates [the sixth, former PM George Papandreou, refused to participate] for the leadership of the KINAL (Movement for Change)?

The first answer came from the social media. There are no posts that refer to any candidate as the winner or to a memorable turn of phrase by any of them in an attempt to corner his opponents.

Perhaps that is why after the debate ended candidate Andreas Loverdos declared [the old slogan of PASOK, KINAL’s precursor] that, “PASOK is here, united and strong.”

Neither of the two candidates that are viewed as frontrunners – MP Loverdos and MEP Nikos Androulakis – appear to have gained points as a result of the debate.

On the other hand, the other three candidates, who have been polling much lower in recent surveys – Pavlos Geroulanos, Pavlos Christidis (who illustrated his positions with insightful examples) and Haris Kastanidis – gained points.

They showed that their electoral performance as reflected in polls do not match the quality of their political rhetoric and of the positions that they express regarding the party and the country.

Will these extra points have an impact on the party leadership election? Nobody can say.

In general terms, one might say that the derby of the debate was played in centre-field. The participants did not opt for an aggressive game plan, but instead took care not to lose points.

The favourites for entry into the second round (Loverdos-Androulakis) showed that their main objective was to avoid a mistake, and in this they largely succeeded.

Andreas Loverdos attempted to corner Nikos Androulakis on who will represent the party in Parliament (Androulakis is now a Eurodeputy), and that led to a skirmish.

Androulakis underlined that the MP who will represent the party in Parliament will be appointed by him with respect for existing procedures.

Loverdos replied that the leader of the parliamentary group is elected by its MPs and not appointed.

We must keep this issue in mind as it will be important if the European Parliament member of the Movement for Change is elected to the party leadership.

Loverdos also focused on the Greece-North Macedonia Prespa Agreement, under which Greece’s northern neighbour adopted its current name. He twice asked his fellow-candidates to detail their position on the issue but received no reply, except from Pavlos Christidis, who adopted the position of the late KINAL leader Fofi Gennimata – voting down the agreement while keeping a distance from New Democracy’s extreme position.

Beyond that, certain barbs about “old young men” and the “recycling of worn personalities” did not appear to garner much attention.

The conclusion is that there was no winner of the debate. It was not a bland soup, as supporters of George Papandreou maintained in order to claim that his decision not to participate was vindicated. Yet, it was not an important turning point in the leadership race.

The battle will be waged over the coming days and will in large measure be linked to the impressions left by the candidates’ main political rallies. More substantially, it will be a door-to-door battle.

Just five days before the first round of the election, the game appears to be wide open. The common conviction is that the outcome will be decided not by how many will get off their couch and vote, but rather who will do so on 5 December.

To a large extent, the outcome will depend on how many people the candidates’ camps manage to mobilise. That is especially true for the candidates who have the best chances of making it to the second round.

In the final analysis, that is where the outcome of the contest will be decided.