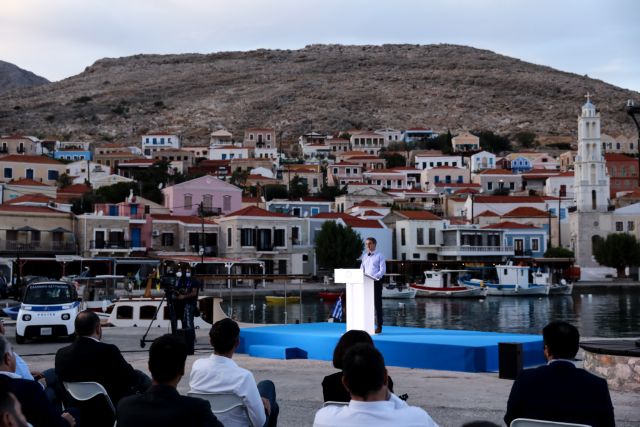 On Friday, November 5, the Prime Minister inaugurated in Halki the project concerning the first island of the national initiative GR-eco Islands, which aims to transform the islands of Greece into models of green economy, energy self-sufficiency, digital innovations and sustainable mobility. The project is a partnership of Greek-French companies, under the coordination of the Ministry of Environment and Energy. It includes the construction and operation of a 1 MWp photovoltaic system that will fully cover the needs of the residents who will participate, through the ChalkiON Energy Community in the production and consumption of clean energy, through the Virtual Net Metering. At the same time, six electric vehicles and corresponding chargers were donated to the local authorities.

At the same time, public lighting was upgraded with “smart” management systems and innovative telecommunications services and technological applications were developed to support e-learning and telemedicine. The intervention was completed with the provision of an electric boat that moves using solar panels. The total amount of the donation for Halki amounts to 1.5 million euros.

What we are seeking through action is, on the one hand, the democratization of electricity generation. The establishment of the Energy Community, in which the Municipality of Halki participates and all residents can register, is the first on an unconnected island, ie on an isolated island electricity system.

For the design of the photovoltaic station, we assessed the electricity consumption needs of local households and businesses, we took into account the movements made by citizens and local authorities, we examined the characteristics of the local economy. Our team at the ministry promoted the idea of ​​building a photovoltaic park capable of enhancing the energy self-sufficiency of the island. Thus the inhabitants become at the same time consumers-producers, that is prosumers.

Halki has 592 consumers, who are represented by 11 different electricity suppliers, while the total annual electricity consumption amounts to approximately 1,600-1,700 MWh. In their next clearing accounts, they will find almost zero charges of the competing arm. Specifically, a company on the island will pay only € 2.38 for the commission charges on each clearing account, from € 239.73 it paid before. Respectively, a typical household will pay € 5.83 instead of € 234.32, while the Primary School only pays € 2.36 instead of € 272.17.

The estimated annual savings are expected to reach 180,000-250,000 euros, depending on current electricity prices. Also, with the implementation of the Virtual Energy Netting, all residents will be protected from instabilities in electricity prices. In terms of CO2 emissions, it is estimated that savings of around 1,800 tons were to be released into the atmosphere. At the same time, in case the production of electricity is higher than the consumption on the island, the surplus will be transferred through the underwater electricity interconnection to Rhodes, consequently reducing the production of the island’s thermal power plant and further improving the environmental footprint of the Rhodes – Halki electricity grid.

The government’s plan for a holistic, green, digital transition of the islands is taking shape with the first GReco Island. Halki offers us a tangible example of integrated political and business intervention. And this is just the beginning!

Ms. Alexandra Sdoukou is Secretary General of Energy and Mineral Raw Materials of the Ministry of Environment and Energy.