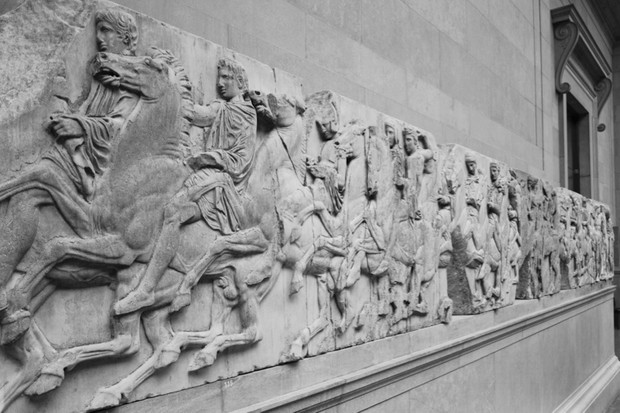 Prime Minister Kyriakos Mitsotakis and British PM Boris Johnson discussed a series of bilateral and regional issues as well as the return of the Parthenon Marbles to Greece during talks in London today.

One of the top issues of concern to both countries is the resolution of the Cyprus problem, as – along with Turkey – they remain “guarantor powers” of Cyprus’ independence (under the 1960 Treaty of Guarantee, one of three that established the Republic of Cyprus after British colonial rule) at a time when Ankara is pushing hard for a permanent partition of the island with international recognition of the Turkish-occupied north as an independent state.

Regarding Cyprus, Mitsotakis stressed Turkey’s intransigence and aggressiveness in Cyprus’ maritime zones, and in opening the fenced-off city of Varosha in Turkish-occupied Cyprus, in violation of UN Security Council resolutions.

Mitsotakis underlined that Turkey’s destabilising role in the Eastern Mediterranean does not leave much room for optimism regarding a substantial bilateral dialogue, for which he said Greece is always ready on condition that international law, including the UN Convention on the Law of the Sea, and Greece’s sovereignty and sovereign rights are respected.

Britain retains sovereign bases on the island, which de facto make it a very significant player in the Eastern Mediterranean, and has played a critical role in all efforts in the 47 years since the Turkish invasion and occupation of the island in 1974 to reach a Cyprus solution.

Mitsotakis congratulated Johnson on hosting the COP26 climate change conference in Glasgow and his efforts to achieve results on a critical and extraordinarily complex issue, while Johnson congratulated the Greek PM on the “leadership” that he exhibited at the conference.

Yet, it was Greece’s latest effort to secure the return of the Parthenon Marbles that captured international media attention.

Mitsotakis over the last several days has conducted a media blitz on the Marbles with newspaper and television interviews in which he stressed that the Marbles were stolen by Lord Elgin in the early 19th century and must return to their rightful home, so that they may be exhibited in the world-class Acropolis Museum where the remaining sculptures are on display.

The international campaign for the return of the sublime sculptures from the British Museum was launched in the early 1980’s by famed actress and then Greek culture minister Melina Mercouri, who made their return a life-long crusade.

“You must understand what the Parthenon Marbles mean to us. They are our pride. They are our sacrifices. They are the supreme symbol of nobility,” she once told British authorities.

Johnson in the past has maintained that the Parthenon Marbles were acquired legally by Lord Elgin [with the permission of Ottoman authorities] and that the issue is closed.

What makes Mitsotakis’ pitch different is that he has proposed in exchange for the permanent return of the marbles to their home in Athens, that Greece is prepared to loan to the British Museum on a rotating basis some of its most important antiquities that have never left the country.

“Greece is ready to offer Britain the Artemision Bronze and the golden Mask of Agamemnon in a deal to return the Elgin marbles,” the London Times reported today.

“Culture officials from Athens discussed the proposal with their British counterparts and Kyriakos Mitsotakis, the Greek prime minister, raised the issue when he met Boris Johnson in Downing Street today. Experts believe the Artemision Bronze, a hollow statue of Zeus or possibly Poseidon, and the Mask of Agamemnon, would attract interest on a scale last seen when the Terracotta Army was loaned to the UK in the 1980s,” the report stated.

Mitsotakis told the British PM that the time has come to meet Greece’s longstanding demand to restore the pieces of the monument in its entirety in the museum at the foot of the Acropolis, that allows visitors to view the sculptures and the ancient temple at once.

In remarks to Greek journalists after his meeting with Johnson, Mitsotakis framed the return of the Parthenon Marbles an important issue that is of concern in bilateral relations.

He said that Greece’s claim is not a mere flare and that Athens will methodically insist on persuading British public opinion of the need for the reunification of the sculptures in the Acropolis Museum. In past opinion polls, a majority of Britons have been in favour of returning the Marbles to Greece.

He said that it is not a legal matter but rather an issue of values and political will, and that Greece will utilise all means at its disposal to achieve its objective.

All Greek prime ministers over four decades have raised the issue with the British government, but to no avail.