Health Minister Thanos Plevris announced that there will be more intensive inspections and stiffer fines for restaurants, cafes, bars, and entertainment venues that violate public health regulations by not checking vax certificates and negative rapid tests. 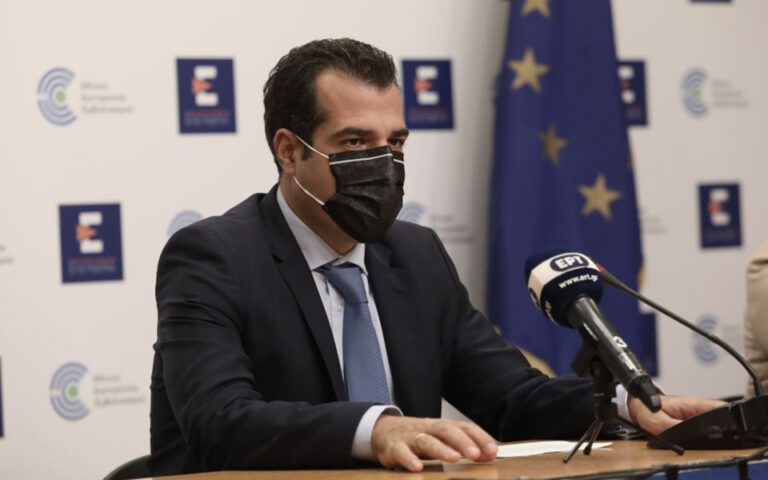 With over 6,000 newly confirmed COVID-19 infections in the last 24 hours and ICU beds full in northern Greece, where many areas have a vaccination rate of 40 percent, Health Minister Thanos Plevris announced strict measures that will limit the access of unvaccinated people who have not taken a rapid test to all venues except for supermarkets, pharmacies and churches (which have a high percentage of anti-vaxxers).

The rationale for exempting people from showing negative rapid test results in those venues was not explained by the minister, who took no questions at his nationally televised announcement of the new public health restrictions.

Under fire from SYRIZA and others for the government’s handling of the flare up of the epidemic and the burden on the National Health System, Plevris said that the government has taken all necessary measures and that private doctors and clinics will be offered incentives to help manage the enormous case load at state hospitals, which are the only ones that treat COVID patients. He said that the ministry has increased the number of ICU beds to 1,300.

He also announced that SMSs will be sent to target groups of unvaccinated citizens and that the government will finally launch a continual, interactive informational campaign ads stressing the pressing need for vaccination.

He called on all citizens to try to persuade those close to them to be vaccinated.

Plevris repeatedly stressed that vaccination is the only way to beat back the surge in cases, and he presented the very tough restrictions on the unvaccinated as a measure to protect their health, as over 85 percent of COVID-19 patients being treated in overburdened ICUs are unvaccinated.

Experts in Greece and elsewhere have long predicted a pandemic of the unvaccinated, and the numbers released by the National Organisation for Public Health confirm that.

“Our basic weapon in this stage of the pandemic is vaccination he said, urging citizens who have gotten the second jab over six months ago to get a third booster shot.

Announcing that new, horizontal nationwide restrictions will be instituted as of 6 September, Plevris declared that the unvaccinated must adapt to new realities.

Both public and private sector employees will have to take a laboratory COVID-19 tests twice weekly.

Unvaccinated citizens will need to show the result of a rapid test in order to visit state services and bureaus, banks, and commercial malls.

Clients at supermarkets, churches, and pharmacies will be exempted from the requirement for reasons unknown.

Plevris also issued a recommendation that masks be worn in all indoors spaces and outdoors when there is a large gathering of people.

He also announced that there will be stiffer fines for restaurants, cafes, bars, and entertainment venues that violate public health regulations by not checking vax certificates and negative rapid tests.

He underlined that the state will step up inspections, which until now were extremely lax.