With a national outpouring of sympathy, Greece bids farewell to Movement for Change leader Fofi Gennimata

In Parliament, she always avoided the routine skirmishes, shadow boxing, and unseemly language that are often characteristic of Greek politics, focusing always on the essence of her centre-left party’s ideology and political positions. 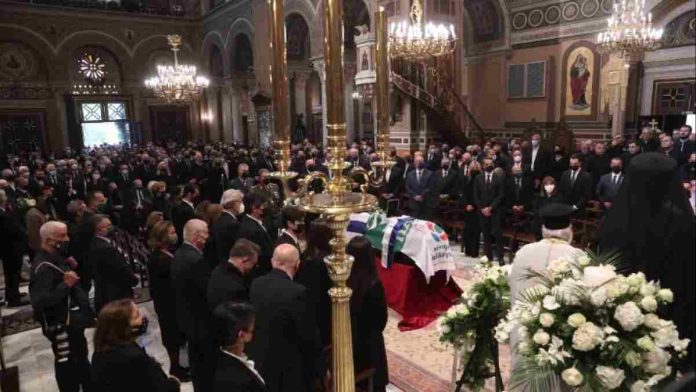 The entire Greek nation bid farewell to Movement for Change leader Fofi Gennimata – known to everyone as Fofi due to her ethos, ingratiating personality, and her signature, authentic and very human beaming smile – in an enormous wave of public sympathy and love, even as a huge crowd of many thousands gathered around Athens Cathedral for her nationally televised funeral and accompanied her casket on foot to her final resting place this afternoon.

Prime Minister Kyriakos Mitsotakis declared today a day of national mourning and flags flew at half-staff at public buildings around the country. The PM, main opposition Syriza leader Kyriakos Mitsotakis, and many representatives of all political parties and of the military – she was the first woman to hold a ministerial post at the defence ministry – attended the funeral.

The outpouring of sympathy was due in large measure to her ethos as a centre-left politician who in 2015 was elected leader of Pasok by over 200,000 members and friends of the party – which for three decades enjoyed political hegemony in the country but was decimated by Greece’s bailout memorandums which began on Pasok’s watch – and united its disparate forces, doubling its electoral showing.

In Parliament, she always avoided the routine skirmishes, shadow boxing, and unseemly language that are often characteristic of Greek politics, focusing always on the essence of her centre-left party’s ideology and political positions, and as a minister her choice of associates was always based on meritocracy.

Yet, equally important was the popular sympathy and respect for a courageous woman who for over a decade battled breast cancer and was among the first people in Greece who spoke out publicly about the disease, which claimed her life at age 57, always stressing that one must not live with cancer with fear, because that fear itself is another kind of death.

Moreover, the tragedy of the Gennimata family struck a deep chord in the public consciousness as both of her parents Yorgos and Kakia Gennimata, died of cancer within months of each other, her mother also from breast cancer, in 1994.

Fofi Gennimata carved out her independent own path in politics, even though she was the daughter of Pasok founding member Yorgos Gennimatas, one of the most distinguished and beloved politicians in post-dictatorship Greece, whose legacy included the creation of the Greece’s National Health System, clearly one of the greatest achievements of the then all-powerful socialist party.

That legacy is felt even to this day, at a time when the National Health System which, despite its dysfunctions, is the sole healthcare pillar that has allowed Greece to successfully manage the pandemic healthcare crisis.

Gennimata has drawn great respect because, as has been emphasised in the days since her death, never used her distinguished lineage to advance her own political career. Notably, when in the 1996 general election, two years after her father’s death, she was asked by Pasok to run for parliament, she turned down the invitation because she was determined not to use her name as a launchpad for a political career.

Still, the fact that she was the daughter of Yorgos Gennimatas, respected and beloved by Greeks of all political stripes to this day, has contributed to the emotional charge that has characterised the groundswell of sympathy of the Greek nation.

If it be true, as the son of Pasok founder Andreas Papandreou, Nikos, said in a recent interview, that deep down most Greeks are Pasok, then the death of Fofi Gennimata has torn a piece of their heart, as she was one of the few remaining links to the idealistic, socialist roots of the party.

It is her personal political legacy, however, that has rallied together members of her party at a moment when it is in the midst of a divisive leadership race, as she laboured until the end of her life for the unity of the party, for which she said just weeks before her death, in announcing her withdrawal from the race for health reasons, that she will continue to fight.

That legacy undoubtedly will be a deep influence on a party that is struggling to define its identity and role on Greece’s political stage, which is highly polarised between ruling New Democracy and left-wing Syriza, that after Pasok was trounced in 2015 general elections, attracted the lion’s share of the base of the party, which she renamed Movement for Change.

Future of Movement for Change

Depending on the results of the next election, which will be held under the direct proportional representation electoral law passed by Syriza before its defeat in 2019, the Movement for Change may function as a kingmaker in the efforts of ND and Syriza to receive a mandate from President of the Republic to form a government, in the absence of the parliamentary 40-seat bonus allotted to the first party under previous electoral laws, which were designed to allow a stable, single-party government to be formed.

Though it is most likely that the PM will call a second election if ND fails to secure a single-party majority, the Movement for Change – which may be renamed Pasok, depending on who is elected leader – will likely play a balancing role in Greek politics.

“She did not lay down her arms. She combined her personal struggle with her battles in the political arena. She responsibly brought to bear the many roles that she had soldiered. She was always near people who were in need, especially women,” she said.

“In bidding farewell to Fofi Gennimata today, we are not saying goodbye only to a woman politician who was distinguished by her democratic ethos, integrity, and effectiveness. We are not only bidding farewell to a woman who confronted her harsh disease with strength and honesty. We are bidding farewell to a model of optimism and vision, a person who with her innate nobility distinguished the boundaries between things public and private with the knowledge, however, of when a personal experience is worth making public in order to support others with one’s own personal truth. The passion with which Fofi Gennimata supported the improvement of public health facilities is a palpable expression of that stance toward life.”