Message to Ankara from Greece, Egypt and Cyprus – What will be discussed at the tripartite summit

It is noted that these alliances – and the wider developments that deconstruct the Turkish narrative of the “Blue Homeland” – have irritated the Erdogan government, which once again resorts to distortion of reality and threats. 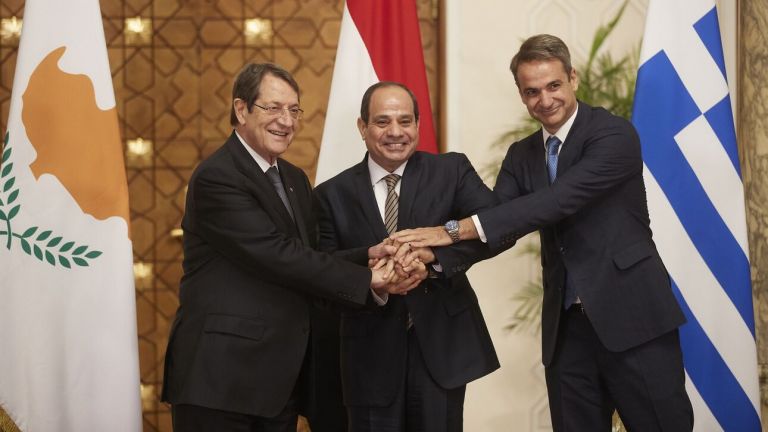 In the wake of Greece’s defense agreements with France and the United States, the 9th Greece-Egypt-Cyprus Tripartite Summit is taking place today, Tuesday, in Athens, at which key regional policy issues are on the table, focusing on developments in the Eastern Mediterranean. the Cyprus issue and Libya, as well as the dynamics of cooperation having as a spearhead the energy sector.

The Athens tripartite is coming to signal the reaffirmation of the strategic importance that Prime Minister Kyriakos Mitsotakis attaches to the grid of regional cooperation schemes, which are based on common perceptions on a number of critical issues, as government sources point out.

The Summit is expected to capture the dynamics of cooperation in a number of areas with energy being the key – as already demonstrated by the bilateral memorandum of cooperation Greece – Egypt for the electrical interconnection of the two countries, a project that will pass through the demarcated Greek-Egyptian EEZ.

Kyriakos Mitsotakis, Nikos Anastasiades and Abdel Fattah Al Sisi are expected to discuss important regional developments and issues, such as developments in the Eastern Mediterranean, the Cyprus issue, developments in Libya in the run-up to the December 24 elections, and Syria.

It is noted that these alliances – and the wider developments that deconstruct the Turkish narrative of the “Blue Homeland” – have irritated the Erdogan government, which once again resorts to distortion of reality and threats.

Indicative are the statements of the Turkish Vice President, Fuat Oktay, who chose to maintain the tension in the Greek-Turkish relations, not being able to hide their dissatisfaction with the latest diplomatic moves of Athens.

The Prime Minister will receive Egyptian President Abdel Fattah al-Sisi at 9:30 a.m. at the Maximos Palace, followed by the work of the tripartite Summit at 11:00 a.m.

The leaders will then attend a working lunch.

Finally, at 19:00, Mr. Mitsotakis will meet, at the Maximos Palace, with the President of the Republic of Cyprus, Nikos Anastasiades.