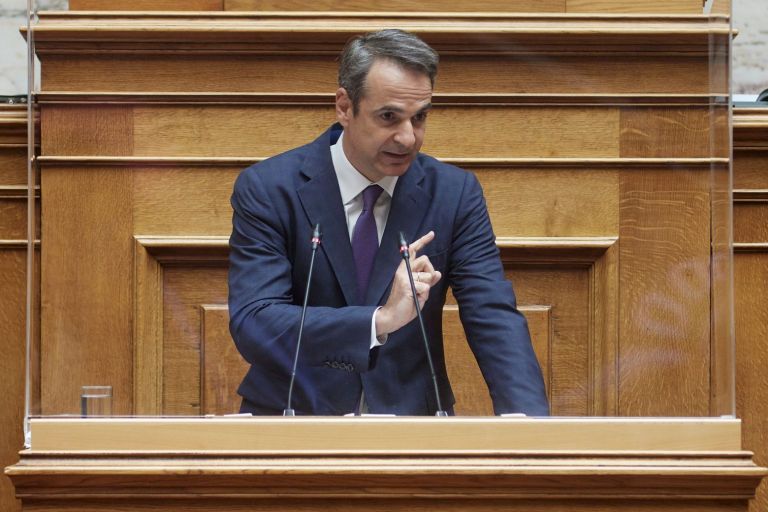 ‘The national advantages are clear to everyone. For the first time there is a provision for military assistance in the event that a third country will attack one of the two countries,’ the PM said.

Prime Minister Kyriakos Mitsotakis staunchly defended the Greece-France strategic cooperation agreement – in the face of main opposition SYRIZA leader Alexis Tsipras’ criticism on the limits of the mutual defence agreement as regards military assistance in Greece’s maritime zones and the provision commits Greece to “advise, assist, accompany, and fight” alongside France in the Sahel region of Mali – in parliamentary debate on its ratification in Parliament today.

SYRIZA will not vote to ratify the agreement and Tsipras said that he will unilaterally revoke Greece’s commitment regarding Sahel if he comes to power.

The PM opened his speech by stressing that the agreement will upgrade bilateral Greece-France cooperation in the areas of defence, security, and foreign policy.

“This historic document that has been tabled in Parliament renders today’s debate historic as well,” he said.

Regarding Greece’s procurement of three French Belharra frigates – which is essentially the centrepiece of the agreement – Mitsotakis stressed that the deal secured for Greece “the best possible price with the greatest possible speed [of delivery]”.

He maintained that the accord shields Greece in the turbulent Mediterranean and strengthens NATO’s southern flank.

“The national advantages are clear to everyone. For the first time there is a provision for military assistance in the event that a third country will attack one of the two countries.”

“We true Europeanists are called upon to become European pragmatists. As far as Greece is concerned, I believe that all citizens have realised the enormous significance of the defence agreement with France,” he said.

“In the event of an attack, our country will have the greatest nuclear power of Europe at its side.

Barbs against parties that dispute the agreement

Mitsotakis argued that opponents of the agreement have contradicted themselves – Tsipras has in the past supported procurement of the Belharras – and that their stance essentially signals the abandonment of the need for a strong deterrent force, including French Rafale fighter jets, to confront Turkish threats on the ground at sea

“Whoever today disputes the procurement of aircraft is himself sinking in the murky waters of his own inconsistencies. Similar defence programmes are being pursued by the [Hellenic] Army. Our country has left behind the abandonment of defence with the inane argument that we will be taking a risk with our neighbours,” he underlined, asserting that the agreement will be a legacy for future generations.

PM asks Tsipras to revise decision to reject accord

Mitsotakis called on Tsipras and SYRIZA MPs to reverse their stance toward the agreement. “I am addressing you because I have been informed of your intention of voting down the agreement. I call upon you to reconsider your stance.”

The PM read an excerpt of the main opposition leader’s 20 December, 2020 interview with the website militaire.gr in order to call Tsipras to task for the inconsistency in his position.

“The aim was and is to conclude a defence agreement with France with the possibility of procuring Belharras for the Hellenic Navy. We did not necessarily have to acquire frigates from France, but they were and are the type of frigates that we want.”

The PM called on SYRIZA not to abstain from the ratification by having MP’s simply declare themselves “present” during the vote.

“Do not barricade yourself behind an awkward ‘present’. Present means absent from the national interest. I heard you put forward two reasons [for not ratifying the agreement] including commitments for the assistance of France [in Greece’s EEZ]. The term national territory includes not only land but also sea and air. The treaty is within the framework of international law,” he declared.