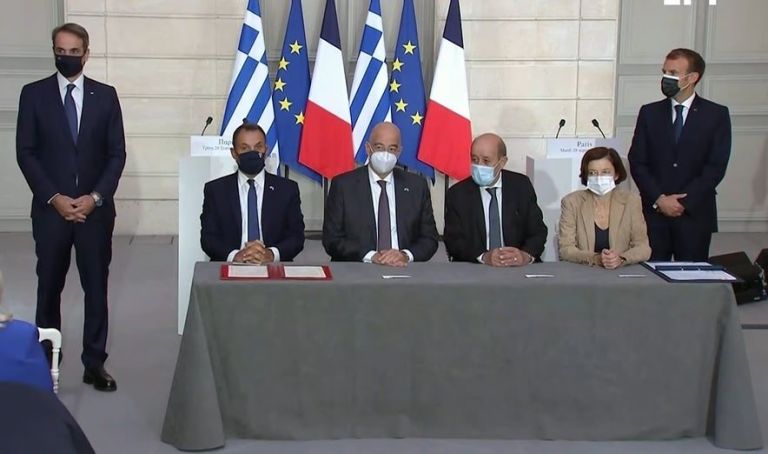 Greece rightly chose to support the “strategic autonomy” of the EU and the creation of a European army – an idea promoted by France, especially after the AUKUS agreement.

The “Strategic Partnership” agreement signed by Greece and France is an important and positive development.

Yet, the distinct mutual assistance clause that it includes is wrong-headed (and indeed written in poor Greek with a term such as “armed violence” instead of “armed aggression”).

The agreement should have included a statement that explicitly and categorically commits France to assist Greece with all means, including military, in the context of activation of the mutual assistance clause in Article 42.7 of the European Union (Lisbon Treaty-TEU (Treaty on European Union):

[“If a Member State is the victim of armed aggression on its territory, the other Member States shall have towards it an obligation of aid and assistance by all the means in their power, in accordance with Article 51 of the United Nations Charter. This shall not prejudice the specific character of the security and defence policy of certain Member States.”]

Firstly, the bilateral clause undermines and weakens the collective TEU clause, which provides that it is the duty of all EU member-states to assist another member-state that is confronted with armed aggression from a third country.

Secondly, it obliges as a rule collaborating third countries to support the military operations of the other country – for example Greece supporting France in the Sahel in Africa, even if the clause of the Greece-France agreement refers to an attack on the national territory of the two countries.

Nevertheless, Greece rightly chose to support the “strategic autonomy” of the EU and the creation of a European army – an idea promoted by France, especially after the AUKUS agreement (US, Australia, UK).

Beyond that, in the words of Henry Kissinger “When you do not solve problems you buy arms”, and this is a purchase that France greatly needed, especially at this juncture.

* Panayiotis Ioakimidis is a Professor Emeritus, Department of Political Science and Public Administration, University of Athens.