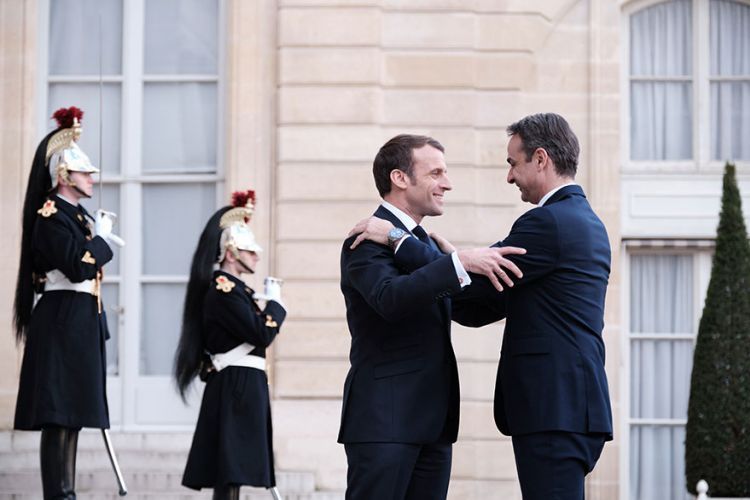 ‘I can say just what I said in my speech at the UN, which is that the demand for strategic autonomy is by now absolutely imperative for Europe to align its geopolitical power with its economic power.’

Prime Minister Kyriakos Mitsotakis’ talks in Paris today and tomorrow with French President Emmanul Macron are of exceptional significance politically, geostrategically, diplomatically, and militarily at a time that Greece continues to face a military threat from Turkey

In an interview with ERT state television on the eve of the expected announcement of a Greece-France defence agreement , which is linked to a 5bn euro total military procurement package to buy French frigates and corvettes and Rafale fighter jets, Mitsotakis indicated that the final details would be decided at his Monday evening dinner with Macron.

“The only thing I can tell you is that we are oriented toward a deepening of the strategic cooperation between France and Greece,” he declared.

Mitsotakis also stressed the need for European defence autonomy, and came out in favour of the creation of a European army.

“I can say just what I said in my speech at the UN, which is that the demand for strategic autonomy is by now absolutely imperative for Europe to align its geopolitical power with its economic power. I believe that Greece and France are two countries which will find themselves in the frontline of this European effort. It is not an effort which in any way undermines Euro-Atlantic ties or NATO. The more powerful Europe is in terms of defence, the more it will have to offer NATO in the final analysis.”

He also expressed Greece’s longstanding support for the creation of a European army that can guard the EU’s borders in a spirit of solidarity.

“One might consider missions in the Middle East, the Sahel, which is of great interest to Greece and France in the Eastern Mediterranean, and missions in which neither NATO nor the UN will participate. The need to guard European borders as both EU and national borders is the exclusive responsibility of Europe,” the PM said.

Mitsotakis said regarding the prospect of a military clash with Turkey that he had expected a calm summer and sees no reason for that not to continue.

Noting that the only tool for resolving Greek-Turkish disputes is international law, the PM said: “Turkey is well aware of what our limits are. They are not only the limits of Greece but also of Europe. Right now we have specific decisions of the European Council that confront Turkey with its responsibilities. I prefer to look at the positive side of things. At the same time, however, Greece has a duty to bolster its deterrent capabilities. We are doing this in a systematic and substantial manner.”

No desire for arms race with Turkey

Mitsotakis stressed that Greece’s bolstering of its defence capabilities should not be viewed as an arms race with Turkey.

“I have no desire to engage in an arms race with Turkey. This is not my intention. There are, however, crucial issues regarding the modernisation of the armed forces, following the decade-long [economic] crisis, which I have the responsibility to handle and hand over to my successor, because these decisions on arms programmes are very long-term. I will hand over strong armed forces to my successor.”

Macron and Mitsotakis visited the Louvre to see the running exhibition “Paris-Athens: The Birth of Modern Greece.

Greece’s celebrations this year of the bicentennial of the start of the Greek War of Independence has been an opportunity to stress the two countries’ historic ties.

Mitsotakis said the exhibition reflected the “indissoluble ties between Greece and France”.