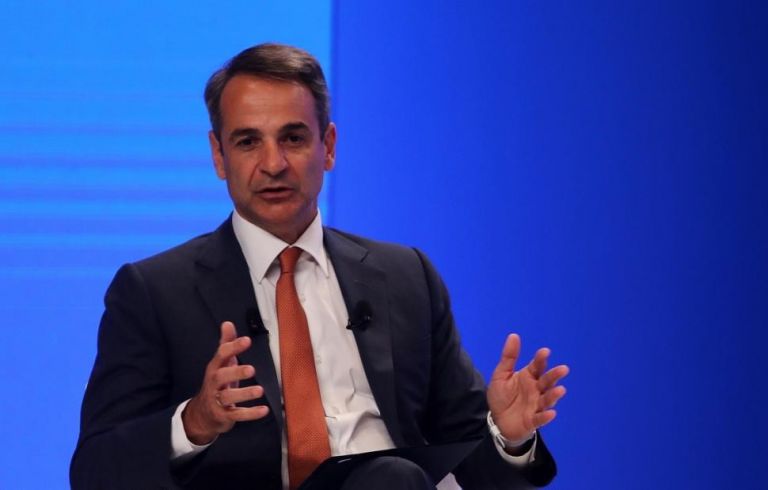 The PM took pains to underline that he does not support an inordinate shrinking of the state, but that he strongly supports public-private partnerships.

Prime Minister Kyriakos Mitsotakis laid out his political credo with a focus on liberal democracy – the term New Democracy uses to describe itself – and his view of the role of the state, political discourse and consensus, populism, public-private partnerships, linking tertiary education with the market, and the value of patriotism, in an article published in the Sunday edition of the newspaper Kefalaio (Capital).

While not naming SYRIZA, much of his article was devoted to indirect but sharp criticism of the left and of its past ideological hegemony. Though none of the stated political principles and objectives of the ruling conservatives is new, he created a mosaic that essentially expresses his vision and blueprint for the country’s future.

The PM underlined the need for common values with the first being co-existence.

“No one has a monopoly on ideas, the truth, social sensitivity, morals, and patriotism,” he said, in a thinly veiled reference to the Left.

“The road may be creative disputes, disagreements, or even clashes, but the destination must always be compromise and synthesis, with absolute respect for a different viewpoint, but without the slightest concession to divisive and bigoted rhetoric,” he said.

The PM, however, recently told Parliament that there is no common ground for dialogue with SYRIZA – which he accuses of extreme populism – and that the government is essentially prepared to go it alone.

Noting his dedication to “the power and depth of an open liberal parliamentary democracy”, he said that, “As Greece’s experience has proven it is the form of government that can transcend economic crises and demagogic adventures [alluding to SYRIZA’s dangerous clash with creditors in July, 2015]…with the truth as a shield to fend off the corrosive activity of populism.”

Mitsotakis made clear that his party does not support untrammelled and unregulated capitalism, but rather stands for “a state that set rules for economic activity but does not deprive it of its dynamism and productivity, without bureaucracy and partisanship and liberated from the dogmatic complexes of the past”.

Mitsotakis also presented a staunch defence of public-private partnerships, which are a core element in New Democracy’s programme.

“I believe the time has come to realise that the words ‘public’ and ‘state’ are not identical,” he said.

The PM took pains to underline that he does not support an inordinate shrinking of the state, but that he strongly supports public-private partnerships, with which main opposition SYRIZA has steadfastly had an uneasy relationship at best.

“This was proven by the pandemic and concurrent crises regarding national issues, as well as by current realities. I remind you that the country’s public health needs were met jointly by the state and grants from foundations. Companies participated in the immediate equipping of the Coast Guard in order to handle the migration issue,” he noted.

“The public and private sectors today are collaborating on major infrastructure projects nationwide.”

Personal progress, national wealth vs. concept of ‘the people’

In a key point of his credo, Mitsotakis said that believes in an open society “that bridges individual liberty with collective prosperity, with personal progress increasing parallel to the increase in national wealth”, so that the state can distribute it justly and with sensitivity toward the weaker classes.

“The precondition for that is that the distinct personality of each citizen must not be lost in generalised concepts, such as ‘the people’”, he said

Though the statement targeted the Greek Left, the Constitution not only respects the concept but makes it paramount, as Article 1, which pertains to the country’s form of government, states that: “All powers emanate from the People, exist for their benefit and that of the Nation, and are exercised as stipulated in the Constitution.”

The PM reiterated his core belief in the need for tertiary education to be linked to the labour market, so that graduates may more easily find employment and in order to boost the competitiveness of the economy.

“That is why contemporary democracy views the educational system as a conveyer belt toward personal advancement and the ‘key’ to progress overall. That is because when it is linked to the labour market it equips a young person with skills that he or she will need in the future. The educational system, responding to the demands of the national economy, will allow the country to become innovative, and to adapt and succeed in a constantly changing international environment that is becoming ever more complex and competitive,” Mitsotakis stated.

In conclusion, the PM declared that in a changing world the one value that “remains unassailable” is patriotism.

“Love of the fatherland and an unswerving dedication to its defence, far from mere rhetoric and facile slogans, and with realism, combined with pro-active diplomacy and the shield of defence, is our compass,” he declared.