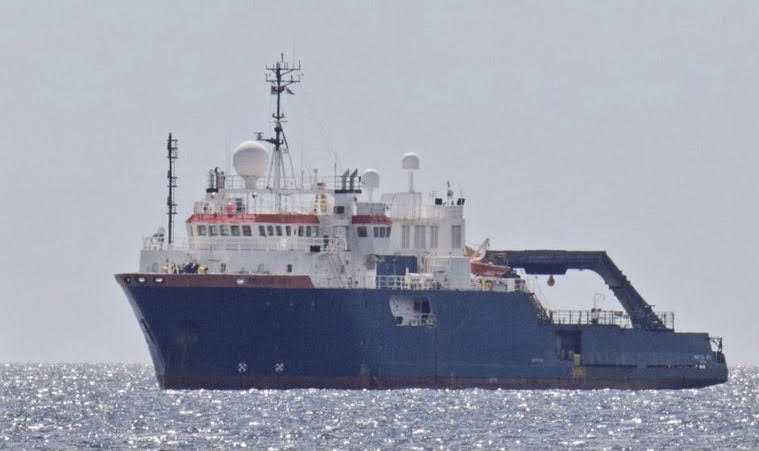 Even as Turkish President Recep Tayyip Erdogan at the UN was calling for a Greek-Turkish dialogue on issues pertaining to the Aegean, the latest conflict between the two countries was ongoing in the Mediterranean, where Ankara disputes Greece’s sovereign rights under the UN Convention on the Law of the Sea, to which Turkey is not a signatory.

In a resounding message that Athens will not allow Turkey to thwart the work of the research vessel Nautical Geo, the Greek foreign ministry has renewed a NAVTEX announcing that its research will continue east of the island of Crete.

The French-owned and Maltese-flagged vessel Nautical Geo, which last week was conducting research east of Crete in the framework of charting a possible course of the EastMed pipeline, was blocked by a Turkish Navy frigate whenever it operated beyond six nautical miles of Greek territorial waters.

Turkey maintains that Greece has only six nautical miles of territorial waters, while Athens counters that it has the right to extend that to 12nm, though it has not done so as well.

In July as well, the Turkish Navy did not allow the ship to conduct research on behalf of the Greek state, which forced it to sail in the broader region north of Crete.

This afternoon the Nautical Geo docked at the Port of Iraklio, reportedly for supplies, yet the naval instructions from the Hellenic Navy’s hydrographic service grant permission for the continuation of research in the same area in which it has conducted research over the last several days, drawing Ankara’s ire.

In one incident, the captain of the Nautical Geo in a wireless communication from the Turkish Navy frigate Orucreis was asked to halt research and leave the area.

The captain of the Nautical Geo informed the captain of the Turkish frigate that he was operating in Greek waters and had received all necessary permits from the only internationally competent authorities, those of Greece.

“We are conducting geophysical research in an area under Greek jurisdiction in accordance with the sailing instructions of Greek authorities. We have obtained all necessary permits from Greece,” said the research vessel’s captain, according to a report on Greece’s Open television.

Ankara bases its objections on a 2019 MOU between Turkey and Libya (the government in Tripoli) on the delimitation of the two countries’ Exclusive Economic Zones, although they are not contiguous.

Greece has rejected both the MOU, which effectively gives Turkey a large swathe of Greece’s EEZ under international law, and a related map that Turkey submitted to the UN in 2020.

Ankara has invoked the said map in maintaining that the Nautical Geo was conducting research in the area of Turkey’s continental shelf.