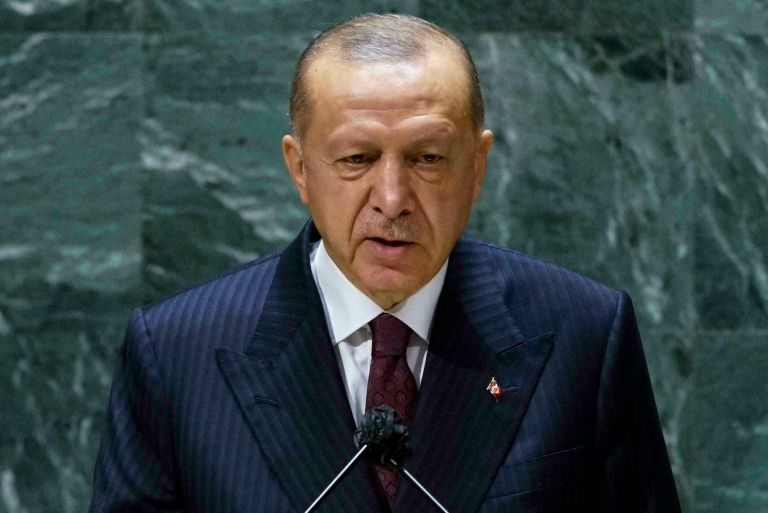 ‘While the leader of one of the two peoples on the Island, which the United Nations considers as equal, can address you, it is not fair that the other cannot,’ Erdogan said.

Amidst renewed provocations against Greece and Cyprus in the Eastern Mediterranean and after an informal moratorium in summer, Turkish President Recep Tayyip Erdogan in his address to the 76th UN General Assembly (UNGA) yesterday presented his government’s steadfast views on the geopolitics of the region and Ankara’s claims.

Though Erdogan did not directly speak of a two-state solution to the Cyprus problem which he, followed by Turkish Cypriot leader Ersin Tatar, have unswervingly demanded in the latest efforts to jump-start Cyprus talks, he made it clear by complaining that Tatar was not invited to address the UNGA, as was the island’s sole internationally recognised leader, Cyprus’ President Nicos Anastasiades.

Though Erdogan’s rhetoric was diplomatic, a far cry from his and his ministers’ frequent outbursts of late against Greece and Cyprus, he clearly articulated his core claims, which have been rejected by strong geopolitical players – the UN, the US, the EU, and Russia – as violating international law.

Complaint over Tatar not being invited to address UNGA

“A fair, lasting and sustainable solution to the Cyprus issue is possible only through a result-oriented, realistic approach. While the leader of one of the two peoples on the Island, which the United Nations considers as equal, can address you, it is not fair that the other leader cannot make his voice heard on this platform,” Erdogan said.

Only the heads of internationally state and government, sometimes represented by their foreign ministers, address the UNGA.

Erdogan was referring to Tatar as the leader of the breakaway state in Turkish-occupied northern Cyprus, which 38 years after its establishment by Ankara is still recognised only by Turkey.

For decades, the UN, along with the Greek Cypriots and Turkish Cypriots have agreed that political equality between the two communities is a core element in reaching the objective of a bi-zonal, bi-communal federation, which has always been the framework of UN-sponsored talks.

Erdogan’s call for “sovereign equality” was a thinly veiled call for a two-state solution.

“I hereby call on the international community to evaluate the views of the Turkish Cypriots with an open mind and without prejudice,” Erdogan said.

Although Erdogan now is, after a brief summer respite, ratcheting up tensions at sea in the Aegean and the Mediterranean, he donned the cloak of a peacemaker.

“The continuation of the calm environment in the Eastern Mediterranean is in our common interest. We hope that the problems regarding maritime boundary delimitation will be resolved within the framework of international law and good neighbourly relations,” he declared.

“For this, it is necessary, first of all, to abandon the understanding whereby Turkey, which has the longest coast in Eastern Mediterranean, is ignored in the region.”

In fact, Ankara has persistently challenged at sea the sovereign rights of Cyprus and Greece under the United Nations Convention on the Law of the Sea by harassing research vessels operating within the two countries’ Exclusive Economic Zones and even in their territorial waters, as occurred days ago with a research vessel operating south of Crete in the context of laying out the course of the EastMed pipeline.

A declaration issued after the summit, which stated that “a peaceful, stable, secure and prosperous Mediterranean is a strategic priority for the European Union” – was widely viewed as a message to Turkey, and so it was interpreted in Ankara.

“The treatment of issues of the Eastern Mediterranean, Cyprus and refugees in the Med9 joint declaration are, like last year’s, biased and short-sighted,” said Bilgic.

Ankara hopes to respond to and undermine the unity and the approach of the leaders of the countries that attended the summit and of the European Commission President – all of whom clearly recognise Ankara’s posture as that of a regional troublemaker that threatens stability – with a conference of its own.

“Our proposal to organise an ‘Eastern Mediterranean Conference’, in which all actors in the region will take part for dialogue and cooperation, is still on the table,” Erdogan told the UN General Assembly.

“Similarly, we believe that the problems in the Aegean Sea should be resolved through a bilateral dialogue,” he added, noting that Ankara is still determined to go forward with its “European Union membership process”.