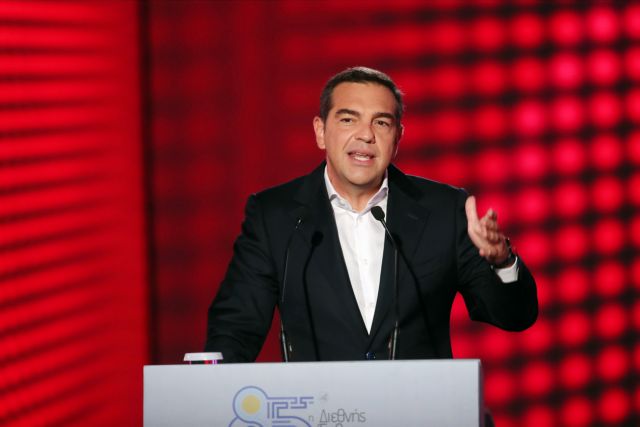 He declared SYRIZA can guarantee a ‘progressive government” that will heal the socio-economic wounds created by the government, which is ‘making the rich richer and the poor poorer’.

Amidst rampant talk of early elections, main opposition Syriza leader and former PM Alexis Tsipras in a major address at the Thessaloniki International Fair (TIF) this evening unveiled his party’s programme and lambasted government policy in a variety of areas, from management of the COVID-19 epidemic to economic, heath, and education policies.

As he stepped up to the podium, mega screens in the background flashed with neon signs with the words Freedom, Equality, Democracy, and Solidarity, along with images of healthcare workers, who occupied the first rows in the audience.

He declared that SYRIZA can guarantee a “strong progressive government” that will heal the socio-economic wounds created by the Mitsotakis government, which he accused of making the rich richer and the poor poorer.

Notably, he suggested that if SYRIZA were to finish first in the next general election he would tap distinguished non-party members and exponents of key social groups to serve in the government.

Tsipras depicted his party as a defender of the middle class, while New Democracy has steadfastly maintained that SYRIZA’s policies of over-taxation, when it was in power, literally destroyed the middle class.

He blasted Prime Minister Kyriakos Mitsotakis with charges that he has created an autarchic government of one-man rule, with the entire executive branch confined to the PMs office, Parliament completely side-lined, and with a harsh law-and-order agenda that has led to the excessive use of force by police.

Pledge to upgrade NHS with 3bn euros in new funding

Tsipras also blasted the government’s management of the COVID-19 epidemic and of August’s disastrous wildfires, in which 13,000 hectares of forestland were destroyed.

He pledged and overhaul of the National Health System with 2bn in state funding and 1bn euros in EU funding.

He also pledged to hire 5,500 more healthcare workers and 10,000 more over a three-year period, as well as to triple existing primary healthcare units to 380 and to bolster home care.

Beyond his steadfast general criticism that government has proven itself incompetent in defending the interests of citizens and has favoured the wealthy, Tsipras maintained that his programme can guarantee a better course for the future of the country, as the government’s policy is based on class-based distinctions at the expense of the have-nots.

The basis of the stated new course declared by Tsipras is a fresh economic policy that will place debt settlement arrangements at the top of the economic policy agenda, as the issue has become urgent due to the huge economic repercussions of the COVID-19 pandemic on the economy and society.

That includes a write-off of a substantial part of the debt accrued during the pandemic by individuals, businesses, and farmers – especially in fire-stricken regions.

Tsipras’ proposal for the settlement of private debt is combined with a proposal for new bankruptcy law that would replace the one passed by the government.

Earlier, on a visit to the TIF kiosk of Oikonomikos Tachydromos, for decades Greece’s premier economic journal, which now has a strong presence with its OT.GR website, SYRIZA spokesman Nasos Iliopoulos said that debt settlement is a key part of the party’s programme, as it concerns thousands of small-to-medium-size businesses that are not responsible for the beating they have taken during the pandemic.

One of the opposition leader’s paramount pledges is a hike of the monthly minimum wage to 800 euros and the abolition of basic provisions of the relevant law introduced by Labour Minister Kostis Hatzidakis.

SYRIZA has focused its criticism of the law, inter alia, on flexible labour relations and the provision that employers can pay for overtime with days off from work.

Tsipras declared that ND has returned labour relations to the “Middle Ages” and has heightened insecurity in society.

Another key proposal announced by the opposition leader is the pilot implementation of a 35-hour work week without a pay cut and with incentives for employers to adopt the plan.

SYRIZA maintains that a hike in the minimum wage can serve as a basic tool in confronting inflation.

Tsipras said that labour policy is one of the most fundamental differences between himself and Prime Minister Kyriakos Mitsotakis.

The main opposition maintains that Greece now has a “Balkan style” labour market.

Tsipras charged that ND’s labour policy was dictated by the Hellenic Federation of Enterprises.

SYRIZA underlines that the average percentage of workers in Europe covered by collective bargaining contracts is 60 percent and that in Greece it is currently just 14 percent. It maintains that the percentage will drop further due to provisions in the new labour law.

Tsipras pledged to bolster and greatly expand the framework of collective bargaining contracts in order to shield workers from the arbitrary decisions.

It maintains that poorly paid labour undermines the country’s competitiveness and that the 2012 move to cut the minimum wage by 23 percent and to institute a sub-minimum wage proved to be a failure, leading to a deeper recession and higher unemployment.

Moreover, it argues that when the SYRIZA government in 2018 abolished the sub-minimum wage and the minimum wage was increased by 11 percent, unemployment fell and insurance contributions increased.