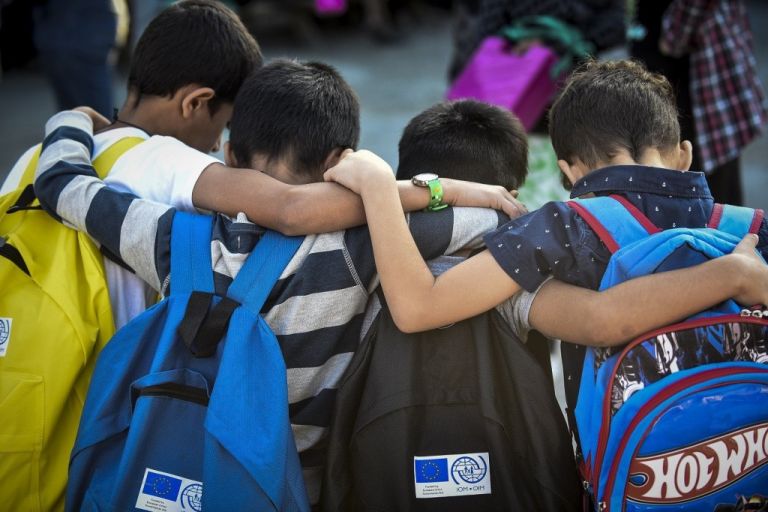 The issue is not just the recent expression of xenophobia by just one MP as regards refugee and migrant children, whether his motivation was vote-mongering or veritable racism.

A heavy resounding battle sound is heard; many xenophobic guns are fired, to paraphrase a famed Greek demotic song about combat.

Unfortunately, we are not dealing merely with the recent expression of xenophobia by just one MP as regards refugee and migrant children, no matter whether his motivation was vote-mongering or an authentic expression of extreme and racist theories.

A segment of society has been inculcated with the ideas of a political current that has bolstered, aggrandised and maintained in the limelight Golden Dawn and so-called “goldendawnism”.

Until now, we believed that we had left behind for good the era when their minions chased and beat up migrants in central Athens.

We believed that a large proportion of refugees and migrants had been integrated in Greek society, or at least that the mature segment of society had exhibited tolerance, sympathy, empathy, and compassion for people who had literally been persecuted and were hungry, destitute, and chased.

Yet, there are still strong extreme-right, racist enclaves comprised of well-dressed people, regardless of their gender, or their social and professional recognition.

They may be politicians, managers, fledgling saviours of the fatherland, singers, actors, or simply professional super-patriots who wanted mainly to garner political benefit.

Any attack of one person against another, especially if it is motivated by racism and xenophobia, is absolutely unjustifiable.

Yet one must ask, o ye shameless putative followers of the religion of tolerance, love, and respect for others, how could you train your fire against children?

How is it possible to throw five-year-old children into the den of lions, making them the prey of a conflict for which they bear no responsibility?

What could possibly be the purpose of isolating and posting the names of refugee and migrant children attending a kindergarten?

What is the purpose of targeting small children, innocent souls?

It makes no difference. They are children and that is what is paramount.

After all, should we not be concerning ourselves with Greece’s low birth rate and seeking incentives that could contribute to raising it?

Should we not fashion a national strategy to increase childbirth instead of picking a fight with small children, some of which may have been born here?

Is the problem that they are not (yet)…Antetokounmpos, so that we can celebrate on the social media but curse black people at home?

Should we not talk about the automatic naturalisation of the children of migrants that were born in our country?

Should we not be discussing a strategic plan for the integration of migrants that would contribute to increasing the population?

At the very least, we should have been glad that these foreign children are attending Greek kindergartens and primary schools.

What do we want, thousands of children outside of schools roaming the streets?

We should be glad that they choose to learn, and indeed in Greek.

All these “super-patriot” Greeks that are raising a fuss should have been glad that young foreign children are partaking in Greek learning and culture.

Clearly, the situation that has developed is shameful and hypocritical.

It is a scourge on Greek society because it bolsters racism and xenophobia, because it raises dilemmas that have no place in society.

It creates a climate for which we will pay dearly if “goldendawnism” grows stronger as a social phenomenon.

In the final analysis, such as state of affairs fuels the far-right and bigotry, especially after the recent racist backlash over the appearance of a large marionette name Amal at an event regarding unescorted migrant children.

We must not allow this to happen.