Pandemic – The coronavirus brought an increase in deaths in July 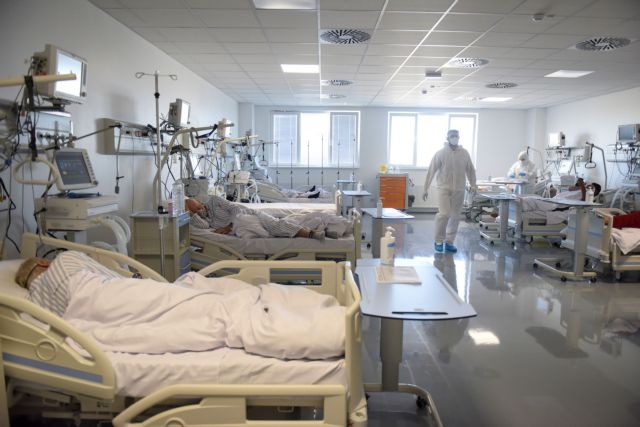 While Europe reduces the additional mortality caused by the pandemic, Greece and Cyprus are recording more deaths than expected

Coronavirus has brought heightened mortality to Greece, having led to 25% more deaths in the summer than in the period before the start of the pandemic. Cyprus is on the same path, with the excess mortality reaching 26%, when in the rest of Europe the corresponding percentage fell to 4.4% last July, according to Eurostat data.

This rate is the lowest in a year in the EU, since in July 2020, the excess mortality rate reached 2.8%. % of additional deaths due to coronavirus.

Across Europe, the pandemic rate of additional deaths has been declining since last April, when it reached 20% – up from 40% in November 2020.

Respectively in Greece in November 2020 the excessive mortality had reached 28%, followed by a course of vertical decrease that reached -8% in January 2021, continued with a vertical increase until April 2021 that exceeded the European average of 20% by five points – that is, it reached 25%. With a “break” of two months, it gradually fell to about 13% by June, only to rise sharply again to 25% in July. 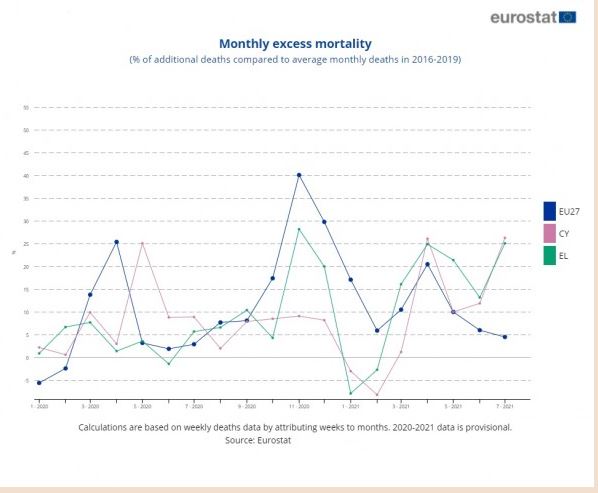 Cyprus is moving in parallel with Greece, where from the drastic reduction of mortality, in total, in February 2021 (it reached -8.3%), in April it exceeded 26%, to be reduced in May to 10% and to returned with a vertical rise to 26% last July, recording the unpleasant lead among European countries, leaving our country second in additional deaths due to pandemic.

According to Eurostat data from last July, Malta is in third place with an excessive mortality rate of 17.7% last July, followed by Estonia with 13.8% in fourth place. 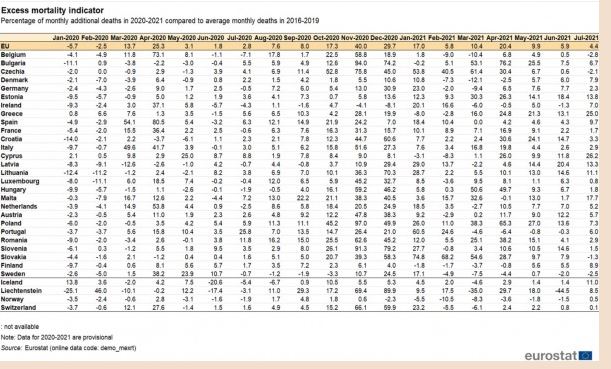 The countries that have managed to reduce mortality to levels below normal are Belgium with -2.8%, Sweden with -2.5%, the Czech Republic with -2.1% and Slovakia with -1, 3%.