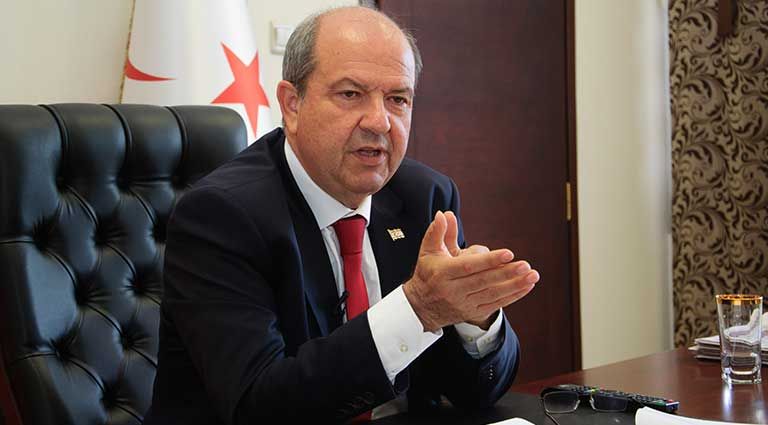 ‘We all know that they [Greek Cypriots] tried in a sly manner to take Cyprus from our hands,’Ersin Tatar said, trumpeting the existence of the breakaway “TRNC, which only Turkey recognises.

Until now, Ankara and Turkish Cypriot leader Ersin Tatar have undermined UN-led efforts to reach a Cyprus settlement with demands for a two-state solution – the Republic of Cyprus and a breakaway state in Turkish-occupied northern Cyprus led by Ersin Tatar, who is essentially a puppet of Ankara.

That has created a huge obstacle for the start of substantial settlement talks as the two sides for 45 years have been conducting talks under UN auspices based on the agreement between both sides that the objective of negotiations is the creation of a bi-zonal, bi-communal federation.

The UN, the EU, and Russia have flatly rejected any such prospect and firmly support the UN framework.

Now, Tatar is ratcheting up tensions with a declaration, at a conference on the Aegean at a university in Izmir, with the claim that Turkey is the legitimate owner of the entire island and that it should have been handed over to the Ottoman Empire or its successor state, the Republic of Turkey, as Cyprus’ Sigmalive news outlet has reported.

Tatar declared that the military presence of Turkey, which maintains about 40,000 troops in the occupied part of the island, must continue because it brought peace after the 1974 Turkish invasion, which made about 200,000 Greek-Cypriots refugees in their own land as there was effectively ethnic cleansing in the north.

Greek Cypriots constituted about 82 percent of the island’s population at the time.

“If there is peace in Cyprus today, it is due to the presence of the Turkish armed forces. Otherwise, the bloodshed would have continued,” Tatar said, reiterating Ankara’s pretext for the 1974 invasion, which was triggered by a brief, failed coup triggered by the Greek junta, at a time when there had been no inter-communal fighting for years.

“We all know that they [Greek Cypriots] tried in a sly manner to take Cyprus from our hands,” he said, trumpeting the existence of the breakaway “Turkish Republic of Northern Cyprus” (TRNC), which no country in the world recognises except for Turkey.

“There is a Turkish Cypriot state in the Eastern Mediterranean and it is the TRNC. This state owns its sovereignty to the struggle of the Turkish Cypriot people [the TRNC was declared in 1983 at Ankara’s behest]. The military presence of Turkey must continue. The Turkish Cypriot people are very concerned about this. The Cyprus problem does not concern only the Turkish Cypriots and the Greek Cypriots. It is a matter that leads to the establishment of balances between Turkey and Greece. According to the Lausanne Treaty, Turkey is one of the parties in Cyprus. Otherwise, the games that are being played in the Aegean will be played in the Eastern Mediterranean,” said Tatar.