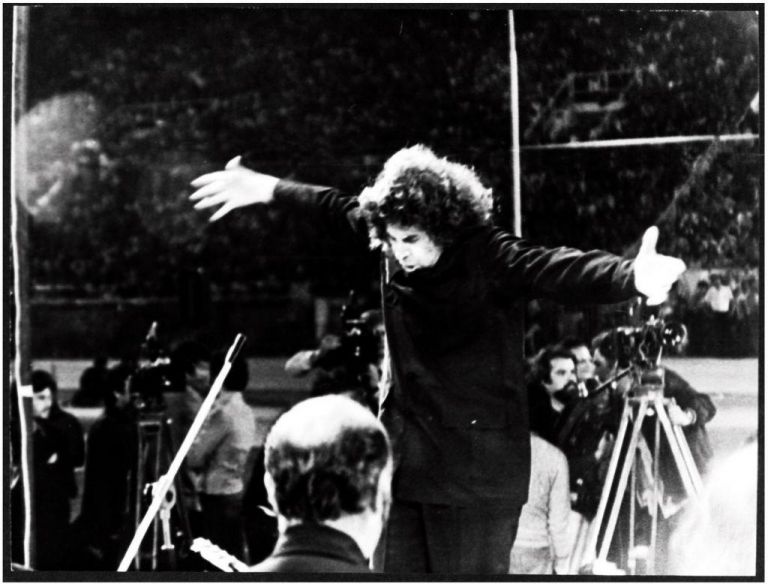 At the age of 96, Mikis Theodorakis passed away, leaving behind an invaluable legacy.

Mikis was imprisoned and tortured during the dictatorship and only in 1970 was he released under intense pressure from great international divs such as Lawrence Olivier, Dmitry Shostakovich, Arthur Miller, Leonard Bernstein, and others.

In 1974, after the fall of the Dictatorship, he returned to Greece and gave two historic concerts at the Karaiskaki Stadium. The great composer has been in Paris since 1970 as he was released after huge international pressures for the torture he suffered and his aggravated health condition.

From August 1967, whene he was arrested, tragic situations followed with isolation, hunger strikes, severe torture and finally the prisons of Oropos.

Mikis from abroad continued the struggle for the restoration of the Republic in Greece and in 1972 he gives concerts in Israel spreading the message of freedom.

In October 1974, three months after Karamanlis’s solemn return to Greece, Mikis organized a big concert at the Karaiskaki Stadium.

The huge attendance of the people forced the organizers to organize a second concert with the most important performers of the country to be by the side of Mikis and the audience turned the concerts into a huge wave of celebration for the new era that was coming.

The films and pictures of Mikis Theodorakis directing on stage and singing with tears in his eyes and the huge crowd following him with passion made the rounds of the world and went down in history.

Mikis’ entrance to the Stadium was accompanied by shouts from thousands of spectators and the slogan “Give the junta to the people” gave way to the song “Ena to helidoni” sung by Antonis Kalogiannis with lyrics by Giannis Ritsos from “Axion Esti”.