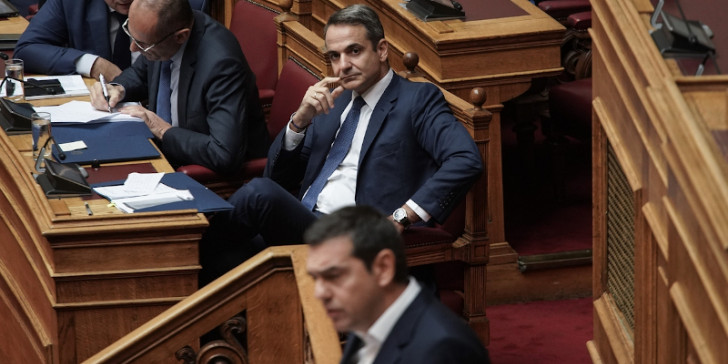 Then there was the migration crisis which brought to Greece and the rest of Europe a wave of desperate and chased refugees and migrants from the poorer regions of Asia and Africa.

Greece and its citizens and the entire world seem to be facing a host of trials over the last years.

A series of factors and conditions have led to repeated, extremely intense crises of various kinds that have tested the endurance of states, governments, and societies.

The current decade has confronted Greece with many such trials which are expected to continue.

At first we experienced the decade-long economic crisis that brought the country to its knees and stirred insecurity in the citizenry.

Then there was the migration crisis which brought to Greece and the rest of Europe a wave of desperate and chased refugees and migrants from the poorer regions of Asia and Africa.

Just as we thought we were on the road to a certain normalcy and management of the economic crisis, there emerged a furious global public health crisis that forced the economy and society into unprecedented restrictions and unique impasses.

This summer, in the middle of the public health crisis, we were confronted with an environmental disaster with wildfires of huge dimensions, part of a multifaceted climate crisis, which destroyed virgin pine forests and filled citizens unable to react with sadness, as all of a sudden they lost their homes, crops, animals, and unique ecosystems.

The intensity of the infernos prevented an unprecedented number of firefighters from acting effectively to limit the enormous damage to the environment.

This wave of catastrophic events fueled tensions, facile and hostile judgments, and pointless political antagonism, without measure, and without a sense of the extraordinary conditions.

An independent observer can understand that each of the aforementioned crises highlights the large number of dysfunctions that have bedeviled the country for years.

The economic crisis revealed the almost permanent fiscal looseness in the decades after the fall of the junta.

The migration crisis brought to the fore the lack of understanding of great international problems and demonstrated the price of irrational geopolitical competitions and upheavals that aggravate insecurity and inequality in the poorer regions of the planet.

The public health crisis revealed the diachronic neglect of the National Health System.

Most recently, events linked to climate change confirmed our anthropocentric egotism, our disregard for nature, and of course the lack of preparation for handling natural disasters.

Unfortunately, despite these very bad experiences, political forces are trying to capitalise on natural disasters for political gain, as a means to return to power.

They are deceiving themselves because even if they [the main opposition] succeed in achieving their objectives, they will be confronted with even more intense catastrophic phenomena in the future. Everyone by now knows that natural disasters are not fertile ground for political exploitation.

The climate crisis and the protracted public health crisis pose existential issues for the country and its people.

They cannot be managed with the terms of political antagonism or as a means to degrade the other party.

Since it is certain that these challenges last, will multiply, and will last for decades, one needs to build a fundamental consensus and above all a mutual understanding on the basic goals and on the initiatives that must be taken.

Stability is crucial for the survival of our country in difficult times of transition.

Political party leaders will debate in Parliament next week. They will explain their positions and show whether they understand the challenges at this critical juncture.