Thomas Piketty: “Neoliberalism is dead since 2008”

The renowned French economist talks about the dead end of present politics, the future transformation of the European Union and his belief on the formation of a “participatory socialism”. 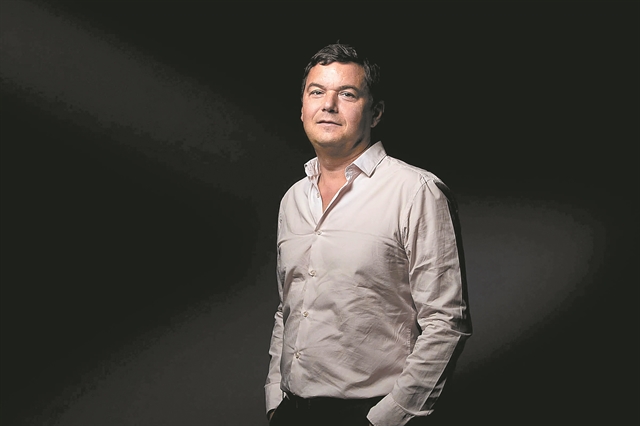 Thomas Piketty differs from the image of an economist we have been used to in the past thirty years. He does not believe in an economics closed off from social science, does not accept the powers of deregulation and probably contributed more than anybody to the return of  “capitalism” instead of  “market economy” in everyday parlance. The 50-year old professor of EHESS and London School of Economics became a household name in 2014 with Capitalism in the 21st Century (in Greek from Polis Editions), a work combining statistic evidence and narrative to document the inexorable rise of inequality after 1980 that became an unexpected global best seller. In his new book Capital and Ideology (upcoming in the fall from Patakis Editions) he adopts an approach that combines economics and social science in order to describe “inequality regimes”, in other words the ideological legitimization of inequality since Early Modern times. At the same time the book chronicles the rise of “hypercapitalism”, the failure of social democracy, its transformation to a “brahmin left” of highly educated elites and the emergence of a “nativist right”, and outlines in detail his own proposal for the formation of a “participatory socialism”. All this resting not just on statistics, historical, literary and even cinema sources, but also on a wealth of comparative evidence collected from non-European societies as Brazil, India and China. “To Vima” talked with the French economist on the wide range of subjects this superb book raises.

Capital and Ideology offers a wealth of possible readings: a history of inequality, a global survey of its justifications, an explanation of contemporary politics. Is it also an argument for an economics informed by history?

Yes, it is first and foremost a plea for the development of a new form of historical and social economics, or a new form of economic and social history, if you want. The growing gap between economics and other social sciences is I believe one of the structural problem behind our democratic crisis. Economic and financial issues have been increasingly left aside and abandoned to a small group of experts – most of time with very conservative views. We need an historical perspective on economic issues, because this forces us to realize that there are always different ways to solve a given problem, such as  a public debt crisis. We need historians, sociologists, political scientists, philosophers to participate to this discussion, and most importantly we need all citizens to reclaim possession of our economic future.

After experiencing a succession of inequality regimes and reaching an “incomplete equality” in the 20th century, how did we find ourselves in the grip of hypercapitalism and neoproprietarianism?

Let me start with an optimistic answer: today’s European societies are far more equal than what they were one century ago, and I strongly believe that this march toward equality can and will continue in the long run. It has been interrupted since 1980-1990 in part because the fall of the communist counter-model has left capitalism with no competition, and in part because social democratic and left parties did not adapt their platform and redistributive ambition to a changing world. But since the financial crisis of 2008 and the pandemic crisis of 2020-2021 more and more people have started to think again about alternative economic systems. The march toward equality can and will continue.

The European Union is written off today by parts of the European Radical Left (and social nativist right) exactly as a “coherent and invincible ordoliberal or neo-proprietarian conspiracy”. Is this a valid assessment or rather a straw man argument?

I think that the European Union can be transformed, but that this will require a big clash at some point. In particular, the rules regarding free capital flows with no fiscal or social counterpart will have to be repudiated. I believe that some form of transnational parliamentary assembly should and will be given the power to vote some common tax over multinationals and billionaires in order to finance investment in green energy, education and health. Right now we feel that everything can be paid for by debt and money creation but this won’t last: we’ll taxes, and we’ll need a transnational assembly to vote for this. However I don’t think this transnational assembly will be the current European Parliament with 27 countries. I think it will be a new European Assembly based on members from national parliaments coming from a small number of countries. A French-German Parliamentary assembly based upon members from the French Assemblée nationale and the German Bundestag was created in 2019. I think this will be the future of Europe, assuming it receives adequate fiscal and budgetary powers and opens up to other countries whishing to move ahead like Italy, Spain, Belgium or Greece.

A “Brahmin left” relying on higher education voters and a “Merchant right” catering to the wealthy parts of the population are more of a dead end rather than a valid political choice?

It is a dead end, and this is why we need more ambitious redistributive platforms and a new international regime in order to rebuild class-based coalitions. The division of elites along education and wealth lines has come together with the division of lower classes along ethno-religious lines, and most importantly with skyrocketing abstention among the disadvantaged. This is not a stable situation for electoral democracies.

Meritocratic glorification today has reached the point where, as you point out, “some people seem to believe that Bill Gates, Jeff Bezos and Mark Zuckerberg singlehandedly invented computers, books and friends”. As far as “singlehandedly” goes, was Elizabeth Warren’s (and at some point Barack Obama’s) “You didn’t build that” argument back in 2011 essentially right in forcefully connecting taxation to the underlying social contract?

Yes, «you didn’t build that» is the right argument. All wealth creation is collective in its origin. There would be no rich country or rich individual today without the international division of labor, the over-exploitation of global natural and human resources over the past three centuries and the accumulation of scientific knowledge since the beginning of mankind. Those who claim «this is my money, this is my marginal product» are little kids who don’t know what they are talking about. Private property is a social construction. It is a useful social construction in order to organize societies in a decentralized manner, but only if it comes with legal, fiscal and social institutions which prevent an excessive concentration of wealth and power to develop. It is up to democratic deliberation (and to nobody else) to put the right limits, on the basis of historical experience.

Although these are not structural reforms by any means, do Joe Biden’s financial package and the EU’s counter-COVID initiative move the needle at all towards the beginning of a new thinking about things or are they just the same old palliative measures? More generally, how does an unexpected global disaster like the COVID pandemic feature in your argument? Will it affect future social developments or is it just a blip in the map?

It is too early to say! I tend to believe that a new historical period has started following the 2008 financial crisis, and that the COVID pandemic will accelerate this transition. To me, neo-liberalism is dead since 2008. The question is whether it will be replaced by neo-nationalism of the Trump-Brexit-Modi-Bolsonaro variety, or by some new form of internationalist socialism. Of course neo-nationalism is much simpler to promote: you explain that the problems face by your national political community are due to the ills of others, and you rely on the imaginary view of an homogenous national community (except for a few traitors). This is a reinsuring view of the world to some, but in the end this is purely imaginary and this does not allow you to solve any substantial problem, as the failure of Trumpism clearly illustrates.

What would it take for the western Left to move towards social federalism, progressive taxation, educational justice, all that you describe as “elements for a participatory socialism”?

Let me stress that the march toward equality has already started a long time ago. There’s little in common between the kind of colonial capitalism in place around 1910 and the form of social-democratic mixed economy in place around 1980. The system of participatory socialism that I envision, and which maybe will be in place by 2050, is not more different to the latter than the latter differs from the former. This stands in the continuity. How will it happen? I think a system of this sort will triumph because this is the only way to solve the problems we have to solve, beginning with rising inequality and the coming environmental crisis. The competition with China’s statist and authoritarian socialism (which in many ways stands at the opposite of the participatory and decentralized socialist model that I am promoting) will also contribute to accelerate the transition. If Western countries maintain their hyper-capitalist, nationalist and arrogant rhetoric, they will simply not be able to compete with China.