Elliniko: Prices for skyscrapers are up to 25,000 euros per square meter 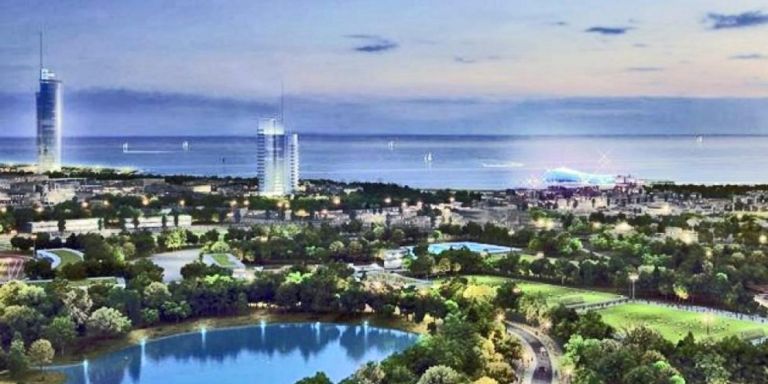 Homes for all wallets are being constructed by Lamda Development

The CEO of Lamda Development, Odysseas Athanassiou, spoke about the emblematic project of the redevelopment of Elliniko, revealing the sale prices of houses.

According to Mr. Athanassiou, the prices of the 9,000 houses that will be built inside Elliniko are for all wallets in order to attract as many Greeks as possible to live in the area. Prices will be slightly lower than those for newly built houses sold  in the southern suburbs, ie below 6,000-7,000 euros / sq.m. He added that 5% of residential real estate concerns upper economic strata with prices starting at 8,000 euros / sq.m. However, for an apartment on the 50th floor of the skyscraper, the price that the prospective owner has to pay is “stunning”, reaching 25,000 euros per sq.m.

“On July 15, we will provide data on home pre-sales. A total of 9,000 homes will be built. In the first five years we had planned to build 500, however because interest is very intense, it is very likely to go to 1,500-2,000 homes in the first five years. Most of these will be offered to the general public. “Of the 9,000 homes we will build in total, about 5% concerns the upper financial part of the population”, said the head of Lamda Development.

He added, speaking to SKAI, that “the prices in the southern suburbs for the purchase of a newly built property are at 6,000-7,000 euros / sq.m. and in order to address the general public, we will go lower, while the houses that will be addressed to the smaller percentage will start from 8,000 euros / sq.m. due to the quality and the construction cost. In every development there is that 1%, which is for example on the 50th floor of the skyscraper, as there are in Monaco or New York, which is also the advertisement of the development. In this case, for a milestone apartment, the prices can reach up to 25,000 euros per sq.m.

According to Mr. Athanassiou, the interest for the purchase of real estate in Elliniko is very strong mainly from Greece, but also from abroad. “On the one hand we want to bring as many people as possible from Greece and on the other hand to bring tourism,”  he pointed out.

Regarding the project implementation schedule, he noted that the first auction of 220m euros for infrastructure projects will take place in July. In fact, on July 7, the company will present the first skyscraper to be built in Greece, while on July 14 the coastal front will open.

“The whole coastal front will be ready in 2025 and the whole shopping center along Vouliagmenis Avenue and adjacent to Argyroupoli and Elliniko stations, the part covered by a park plus the sports facilities, we have the ambitious goal that it will be ready in 2025. However “At the beginning of 2020, we will have people who can come to Elliniko to be entertained in a place full of surprises”, he added.

Regarding the creation of new jobs, he said that in the implementation phase of the project will employ about 10,000 persons, while when the conference and shopping centers, hotels, etc. start operating, “studies show that we will reach 70,000-80,000 jobs”.

Finally, regarding the transparency of the tenders, the CEO of Lamda Development underlined that “we will show that in Greece we can do projects worth billions of euros with absolute transparency and integrity and this means that we will hold tenders for all projects, even the smallest. There will be at least three bidders, the terms of the tender will be clear in advance and internally in the company there are independent different evaluation committees for each procurement “, underlined Mr. Athanasiou.