Feminist and other women’s movements are mourning, but they are also confirming their determination to struggle, side-by-side with movements around the world, to put an end to femicide. 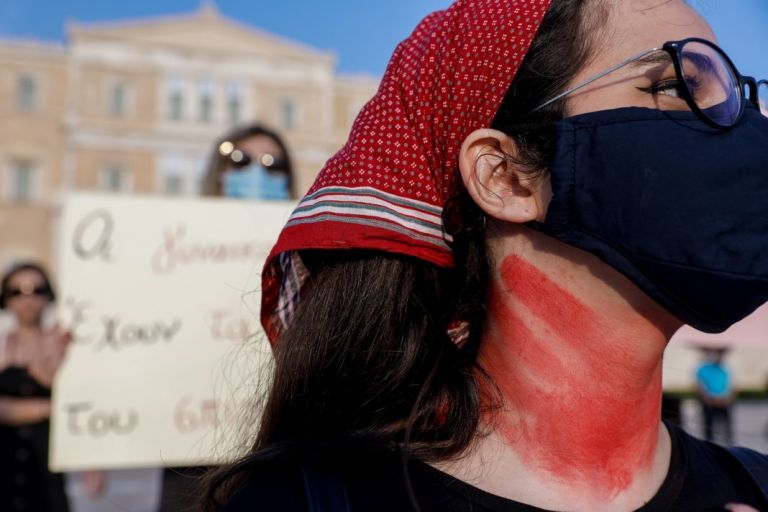 In the aftermath of the confessed, cold-blooded murder of 20-year-old Caroline Crouch by her husband Babis Anagnostopoulos, a pilot, women’s organisations held a demonstration today in Syntagma Square calling for the establishment of the term femicide as a distinct crime.

The demonstration began at 7:30 pm. As was recorded on video, dozens of women dressed in black, some of whom had painted their necks with red hands, symbolising blood, protested to demand an end to a long list of femicides in our country.

“The murderers of women have the keys to our homes’

With slogans such as “No means no!” ‘Patriarchy murders”, “The murderers of women have the keys to our homes”, and “A woman’s place is in the struggle”, women of all ages vented their rage and anger over murderous sexism and the system that has reproduced it for years as it strengthens patriarchy, which not infrequently can lead to brutal femicide.

The banner that set the tone at the protest read, “They are killing us. Not one woman must be lost”.

Their stated demand is the creation of a framework and social current that can put an end to sexism, patriarchy, and racism.

Notably, the Hellenic Network for Feminist Strike believes that the murder was carried out in cold blood and that this confirms that one of the main motives that brings men to kill is the effort to check and establish ownership of women, in line with the theory of the “owned woman” that reinforces and reproduces patriarchy.

One of the most heinous femicides internationally, the murder of 20-year-old Caroline, was just the most recent in a long list of femicides in our country.

The culprit is a young, economically comfortable and privileged man – a “good father” who was in fact a patriarchal monster whose character resembles that of another “monster”, a Greek-Cypriot military officer who was convicted as a serial woman-killer.

In a calculated manner and in extreme detail, Anagnostopoulos planned the crime, using his own child as cover and not hesitating to murder a defenceless dog all because, as he claimed, “She said she wanted us to separate. That is why I killed her.”

He thus confirmed that one of the chief motives for femicide is the man’s effort to control and own women.

A legal system contributes in its way to the perpetuation of structures that permit femicide.

It refuses or is unable to focus on the misogyny behind crimes.

It shifts the blame to the victim. It accepts a double moral prototype and it ends up highlighting and confirming the failure of the state to protect half of the country’s population.

Where is the state in all of this? How does it protect something over half of its population?

Does it do so by refusing to recognise the term femicide (gynoktonia). What is it afraid of when it already acknowledges, for example, the term child-killer?

Does it do so by passing laws such as the recent bill on joint custody, ignoring the warnings about this invisible, for its authors, factor that governs confrontational marital relations and often enough leads to savage femicide, as occurred in the case of Caroline.

Feminist and other women’s movements are mourning, but they are also confirming their determination to struggle, side-by-side with movements around the world, to put an end to femicide.

It leaves no room for such phenomena, as was made clear in the UN’s 2013 Declaration on Femicide.

The time has come for us to adopt the word femicide.