Mr. Samaras opposes Greek-Turkish talks but forgets that while in power he permitted exploratory talks to be held and he held direct talks with Turkish President Erdogan. 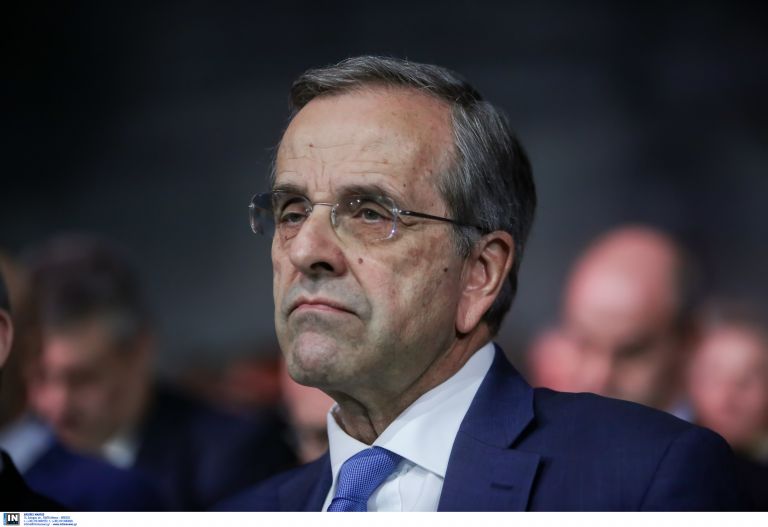 He did so in a flashy manner on the eve of the resumption of exploratory talks with neighbouring Turkey in Istanbul.

He undoubtedly acted with a purpose. He wanted to jump the gun by casting a shadow over the preparatory talks and to thus commit the Mitsotakis government to not proceeding with any kind of dialogue with Turkey.

According to the former PM Greece cannot hold talks with “pirates”.

He views Turkey as a power that is laying claims and could trample on Greek sovereignty in the Aegean and the Eastern Mediterranean.

Hence, he believes we have nothing at all to discuss but he forgets that while in power he permitted exploratory talks to be held and he held direct talks with Turkish President Recep Tayyip Erdogan.

Beyond the issue of the Greek-Turkish dialogue, Samaras said he will vote down any draft legislation required for implementing the Greece-Northern Macedonia Prespes naming agreement.

He has thus created the impression that he wants to express the nationalist right-wing in Greece in an absolute manner.

The truth is that Antonis Samaras is not operating in a vacuum. For decades he has had an intransigent stance on national issues and has played the nationalist card, sometimes donning the mantle of the fighter for Macedonia’s freedom and at others playing the relentless opponent of the Turks.

At times he advertises his family’s traditions and his political descent. He depicts himself as the political offspring of the late conservative leader Evangelos Averof who at times had held talks with the Turks.

At the same time, he depicts himself as a fan of political realism, especially in international relations.

The former PM bears his share of responsibility and his political stance and career must be examined.

Those who have closely followed his political career describe him as an obsessive and impulsive individual without inhibitions or reservations.

He cannot reconcile himself to the idea of political isolation and so he is constantly seeking roles and the attention of public opinion.

He entered politics from an advantageous family position at the age of 25 in the first years after the fall of the junta in 1974.

He immediately linked up with the hard right of the conservative party.

His tenure as finance minister in 1989 was problematic but his term as foreign minister (1990-1993) was catastrophic.

He did not absorb, understand, or exploit the great changes that followed the fall of the Soviet Bloc in the early 1990s.

Instead, he fueled hatred and civil war-type tensions on the Macedonian naming issue.

He exploited the sentiments of the Greek people and made a huge affair out of a foreign policy issue of secondary importance in order to build a leadership image.

He played the populist nationalist card and thus brought down the government of Constantine Mitsotakis supposedly in the context of a national struggle, but there was much more to it than that.

He then founded a party, failed miserably, and for the next decade lived in political isolation and jobless.

PM Kostas Karamanlis re-inducted him in the party as a counterweight to the Mitsotakis family which always eyed the post of New Democracy leader.

Samaras eventually succeeded Karamanlis after the electoral defeat of 2009 but the political desert in which he spent a decade did not change him as his acts and choices in his first years as leader demonstrated.

Everyone remembers the arrogant, groundless, and notorious Zappeio economic plans during the memorandum era. These fueled anti-memorandum outbursts and prepared the path to power for Alexis Tsipras.

Due to his deep eagerness to govern he left unfinished the work of the Papademos government and his prime ministry was recorded as a constant wavering between reform and populism and various interests (everyone remembers the hasty sale of the OPAP betting company to the Czechs).

When Mr. Samaras was defeated in the 2014 European Parliament elections he handed over his spirit and the party to the scorn of other defeated parties.

Since then he seeks roles and influence on the sidelines and when he doesn’t find them he lights flames and organises separatist groupings.

After his recent interventions many are wondering whether he is preparing to rock the government of Kyriakos Mitsotakis as well.

The conditions are not the same and his capabilities are limited. Some say to err twice is not the trait of a wise man.

Others, however, insist, as the saying goes that, “Even if the wolf grows old with white hair, it has not changed its mind or its head.”