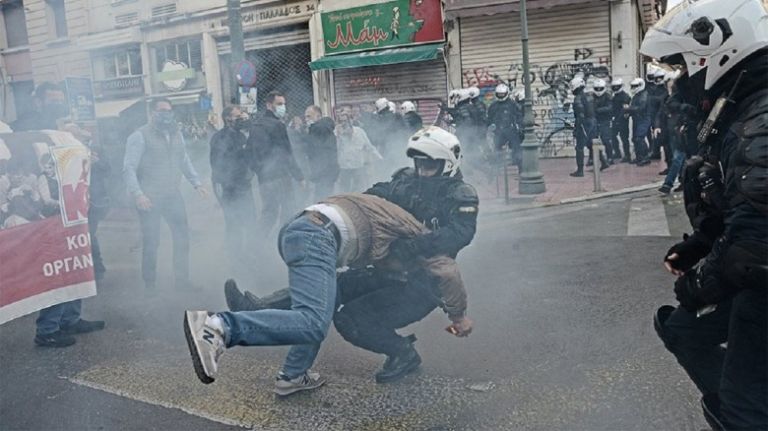 The conservative New Democracy government of Kyriakos Mitsotakis took a controversial decision to ban not only the massive annual protest march but also any gathering of over four individuals nationwide.

On 17 November, 1973 students at the Athens Polytechnic and thousands of others staged an uprising against the colonels’ dictatorship (1967-1974), the first major challenge to the junta which protesters then and for decades for decades have viewed as the product of American and Nato backing and interventionism.

Since then thousands have joined an annual commemorative march on the US Embassy in Athens that begins at the old Polytechnic campus with university students carrying the blood-stained Greek flag, splattered when an army tank broke down the heavy iron gate of the campus where the students were holed up and were met with a rain of soldiers’ gunfire.

This year was different.

With Greece rocked by the devastating development of the COVID-19 epidemic, with hospitals and especially ICUs nationwide having reached their limit and the National Health System at risk of collapse, the conservative New Democracy government of Kyriakos Mitsotakis took a controversial decision to ban not only the massive annual protest march but also any gathering of over four individuals nationwide for the three day-period during which the anniversary is marked.

The decision was taken even as all citizens are required to send an SMS to exit their homes and only for aan extremely restricted (six categories) number of justifications.

In the first lockdown in the spring churches nationwide were shut and the faithful were not permitted to attend even Good Friday and Easter services services.

The move prompted a political maelstrom with opposition parties crying that the decision that was taken by Citizen’s Protection Minister Michalis Chrisohoidis (a tough former Pasok public order minister on whose watch in 2002 the notorious November 17 terrorist organisation) the order issued by Greek Police was authoritarian and unconstitutional.

Chrisohoidis deployed an army of 5,000 policemen throughout Athens to prevent any commemorative gathering or march, shutting down all the streets around the Polytechnic and throughout Athens.

President of the Republic Katerina Sakellaropoulou and PM Mitsotakis both laid wreaths at the historic Polytechnic campus where the uprising occurred.

Though the restriction of freedom of assembly was justified as measure to prevent the spread of the deadly epidemic, in certain parts of the city hundreds of policemen and riot police were clustered closely together wearing mask but not observing social distancing rules.

Moreover, opposition parties pointed out that the government took no measures to enforce public health measures in October when 10,000 anti-fascist protesters gathered outside the Athens appellate court where the conviction of the Golden Dawn party and leadership was announced and when on 26 October in Thessaloniki thousands gathered for the feastday of Saint Demetrios, the patron saint of the city.

Though authorities stated that their move to limit gatherings to four people was based on the recommendation of the government National Scientific Advisory Committee on COVID-19, the spokesman of the committee, award-winning virologist Gkikas Magiorkinis told a scheduled news conference on 16 November that the committee has strongly recommended a ban on large gatherings but from thereon in the four-person restriction was a state decision.

The decision also triggered a fierce debate between constitutional scholars over whether the nationwide extreme restriction of the freedom of assembly is constitutional.

The issue was resolved yesterday by the Council of State, Greece’s supreme administrative court, which threw out the petition of the leader of the small MeRa25 party, former Syriza finance minister Yanis Varoufakis, who asked that the order limiting the constitutionally guaranteed freedom of assembly be annulled.

Today, several hundred KKE members as the party had previously announced staged a well-organised march of hundreds of protesters who lined up in rows with strict compliance with public health guidelines, keeping a two-metre distance between the rows and between the protesters in each row.

They had done the same during the first lockdown I the spring when they staged a large Mayday gathering in Syntagma Square with strict social distancing measures.

The march, led by Koutsoumbas, was stopped by hundreds of riot police on Panepistimiou Street and television stations carried video of marchers being attacked and arrested and KKE MPs being manhandled by police.

Koutsoumbas on the spot conducted negotiations with police for about 20-minutes and offered to disband the march and to retreat to where it began if police were to release those of his comrades who had ben arrested.

The ministry rejected the request and the few hundred marchers were attacked with water cannons and tear gas.
KKE MP Thnasis Pafilis on accused the government of autocratic behaviour and hypocrisy as daily public buses and metro stations are tightly packed with commuters especially during rush hour due to the inability to add more vehicles and more frequent runs.

Tsipras along with 50 MPs and party members laid a wreath at the junta’s EAT-ESA (military police interrogators) building, very near the US Embassy. where the junta tortured hundreds.

Varoufakis staged a small march wih a handful of his MPs and was blocked by police. He accused the government of the “Orbanisation of the country, a reference to Hungarian PM Viktor Orban’s use of the coronivirus pandemic to impose highly autocratic measures.