“Blue Homeland” aims to the surrender of Greece and Cyprus 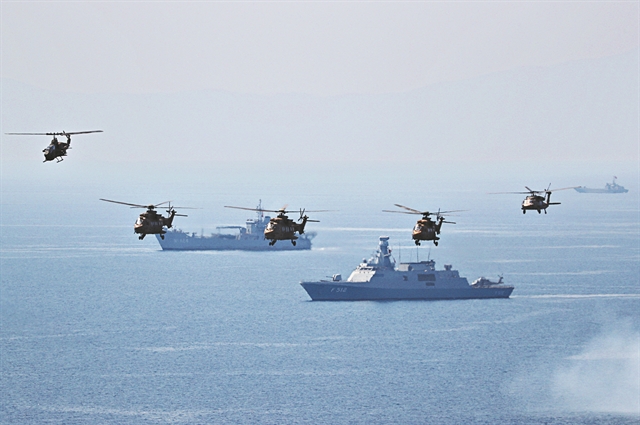 There is good reason to see Turkey’s Blue Homeland initiative as a bargaining tactic. Ankara asserts that its aggressive posture in the Aegean and Mediterranean stems from what it believes is Greece’s unwillingness to negotiate. A host of issues integral to Turkish interests remain unaddressed: natural gas in the Mediterranean, Greece’s militarization of territory in the Aegean, disputes over unpopulated islands and rocks, as well as, most importantly, the status of the Northern Republic of Cyprus. Erdoğan has stated, as far back as a decade ago, that his government’s patience is at an end. In 2011, he cited rising tensions with the Republic of Cyprus as cause for sending Turkish ships for seismic studies of the Mediterranean floor. “From now on,” he added, “we will continue to implement whatever our national interests require without hesitation.” Nearly a decade later, Erdoğan’s threat has assumed greater force.

Ankara’s Blue Homeland animates a great deal of public discussion at home. Turkish news programs now regularly feature in-depth treatments of maritime strategy for popular consumption. Headlining these exposés are often former admirals with a vested stake in the government’s policies. From their perspective, Blue Homeland is not simply a new approach to old problems. Rather it is an existential statement about Turkey’s identity, history and aspirations.

Turkey’s Blue Homeland primary authors, admirals such as Cem Gürdeniz, Cihat Yaycı, Söner Polat and others, share much in common. During their youth, the crisis of 1974 left an indelible mark upon their impressions of Greece and Cyprus. Virtually all of them share hardened Kemalist views about the nature of Turkish identity and history. For them, every square inch of land claimed by the republic has been Turkish for up to a thousand years. As officers, events since the Cold War have taught Turks especially bitter lessons. Among them is the belief that Turkey is enveloped by both foreign and domestic enemies. Powerful Western states, most notably the US, have habitually worked to undermine Turkey’s sovereignty and interests. In spite of these challenge, they have witnessed Turkey grow to become a power unto itself. Turkey’s military adventures since 2016, coupled with its advances in native drone and maritime technology, have done much to validate this status. While they may disagree with Erdoğan on matters of domestic politics, their vision of Turkey’s place in the world are generally similar. What they seek is not the restoration of the Ottoman Empire, as it is often believed, but the realization of Turkey’s contemporary potential as power. Direct influence over the eastern Mediterranean and its vital waterways is key to this goal.

From this vantage point, Greece and Cyprus are critical obstacles to be overcome. It should come to no surprise that the bitter conflicts of the nineteenth and twentieth centuries continue to influence how Turks perceive Greeks to this day. For admirals and sailors in the Turkish navy, past antagonisms often resound in their training and professional experiences. Blue Homeland, however, is not meant as an act of historical retribution. It is instead conceived as a decisive response to what one noted officer called Greece’s “endless fantasies.” Powerful opinion-makers such as Cem Gürdeniz and Cihat Yaycı argue that Greece is a “revisionist” threat to Turkish abilities to grow and thrive as a power. Their arguments against Greek and Cypriot claims in the Aegean and Mediterranean are only partially grounded in their belief that islands, regardless of their size, lack legal standing as national territory. Both states, bluntly put, are weaker and poorer while Turkey is larger and strong. Greece particularly relies on Western backing in the hopes imposing their will on Ankara. Greeks, as it has been said more than once, should instead “know their place”.

What this posturing means for the future of Turkish-Greek relations is not clear. Erdoğan has been known to abruptly change course when it suits him. Financial troubles, or perhaps the real threat of sanctions, may lead Ankara to abandon its current course. Acts of provocation, however, have already produced strong results for Ankara. Other advantages, such as the rapid growth of its navy, play to Turkey’s long-term advantages. Meanwhile, the notion of Turkey as an ascendant maritime power continues to electrify the Turkish public. Leaders of Turkey’s opposition even agree that Ankara’s maritime claims must be defended with the same vigor as its land borders. The depths of this consensus in Turkey suggest that Blue Homeland is no ploy. It is a vision that intends to leave Greece and Cyprus little choice but to surrender.