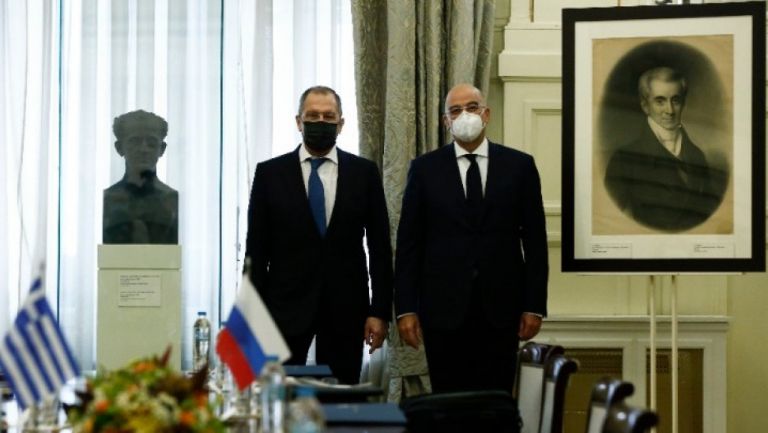 Russian Foreign Minister Sergey Lavrov today came out in support of  Greece’s right to extend its territorial waters to 12 nautical miles, in accordance with the 1981 UN Convention on the Law of the Sea after talsk wth Foreign Minister Nikos Dendias in Athens today.

Lavrov’s visit comes amidst heightened Greek-Turkish tensions in the Aegean and the Eastern Mediterranean and even as Turkey is challenging at sea Greece’s right to extend its territorial waters off the coastof the island og Kastelorizo, where a turkish research vessel came very close to the current six-mile limit.

The Turkish Grand National Assembly (parliament) in 1995 had passed a resultion that was never rescinded that if Greece wer to extend its territorial waters ti 12 nm that would be a casus belli,  a cause for war.

It also comes at a time in which Moscow is at loggerheads with Turkey both in Syria and Libya.

Beyond that Lavrov’s visit is a key step in breaking the chill that prevailed in Greek-Russian relations after 2018, when Alexis Tsipras was in power and Greece expelled Russian diplomats on the grounds they were fomenting opposition to the the Greece-Northern Macedonia Prespes Agreement which offered Skopje admission to Nato.

Moscow reciprocatd with the expulsion of Greek diplomats

Dendias said that today during their meeting, he made a special reference to Greece’s inalienable right to extend its territorial waters to 12 nm and that the Russian foreign minister had replied that, «Russia can’t adopt any other stance apart from that supported by the Law of the Sea,» adding that every member of this Treaty can register its territorial waters up to 12 nautical miles, following common sense and geographical neutralities.

Lavrov said that the difference may be resolved only through deliberations that respect and take into account the interests of each side.

«Any problems that may arise between countries should be resolved with dialogue. However difficult the situation between Greece and Turkey may be at present, we will always support discussion and the resolution of these problems through the direct talks,» Lavrov said.