Greece, Abania to refer EEZ delimitation to the Internationaol Court of Justice 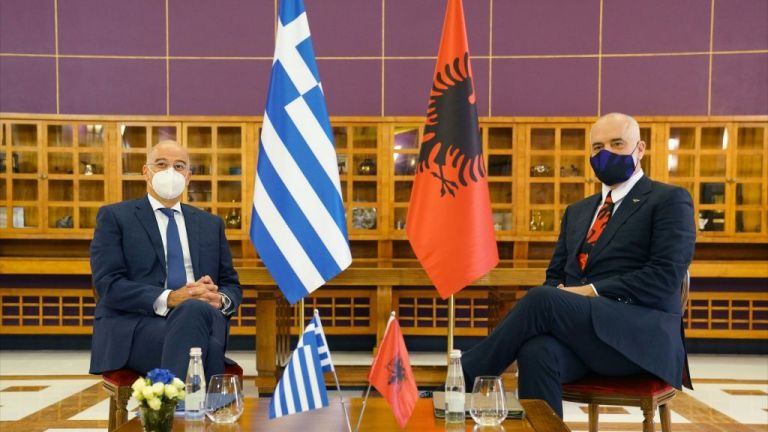 Greece and Albania decided to refer their maritime zones issue to the International Court at The Hague, during a meeting between Greek Foreign Minister Nikos Dendias with Albanian Prime Minister Edi Rama in Tirana on Tuesday.

«Having examined the issue thoroughly, we agreed that Greece and Albania would jointly take recourse to international justice, the International Court at The Hague, on the issue,» Dendias said following a meeting with Rama.

«This agreement is based on the consistent adherence by both countries to international law and the principle of resolving differences peacefully,» he added.

In 2009 when Kostas Karamanlis was PM and Dora Bakoyannis was foreign minister Greece and Albania signed an agreement on the delimitation of their Exclusive Economic Zones (EEZs) but the then opposition challenged the accord as unconstitutional in Albania’s Constitutional Court and the deal was canceled.

Greek analysts at the time viewed the court ruling as the result of strong pressures from Ankara on Tirana.

Dendias noted that the two countries had agreed on a strategic collaboration.

«We discussed the Greece-Albania agreement of 1996 and we agreed that this treaty requires deepening and strengthening. We [decided] to proceed jointly to a new strategic collaboration agreement between the two countries and to set up a G2G meeting and mechanism between the two friendly countries.»

The ministers also discussed the issue of an outstanding state of war in which the two countries amazingly have been since 1940, when Italy attempted to invade Greece along with Albanian troops and Italian troops were pushed back into Albania

Dendias called the lingering state of war «an anachronism» and said the issue will be resolved.
They also discussed the issue of minorities and the spirit that should underpin good neighbouly relations.
The Greek minority in the southern part of Albanian have repeatedly suffered attacks by Albanian nationalists and state discrimination, most notably with the expropriation of valuable properties of the Greek minority in the seaside city of Himara, which is part of the so-called Albania Riviera.

Dendias welcomed the progress Albania has made in issues related to the Greek community there. The accession of Albania to the European Union is a joint goal of both countries, he underlined, noting Greece’s longstanding and consistent support for the EU accession of West Balkan countries.

Greece articulated that support clearly as early as 2003 when it held the EU presidency at a summit in Chalkidiki.

Dendias said that, “Turkey «is moving in the opposite direction and is continuing to violate fundamental EU accession criteria – both political and economic – on a daily basis.»

For his part, Rama said that a very positive chapter has opened in Greece-Albania relations.

Rama referred to Greece as Albania’s strategic partner, and stressed that Greece never stood in the way of Albania’s EU accession process.

He also lauded Greece’s input at the EU’s Coronavirus Global Response Pledging Conference held earlier in the year, and called Dendias a friend of Albania and all Albanians, particularly after Greece offered aid when a devastating earthquake struck his country.

Speaking on the rights of the Greek minority in Albania, he said his country intends to move forward with the completion of the necessary legislation for the full implementation of the law on minorities in Albania.

«EU welcomes announcement by Albanian and Greek governments on the way forward on their maritime dispute. Issues related to delimitation of borders are indeed best addressed through dialogue, in accordance with International Law and in pursuit of the principle of good neighborly relations.»