Borrell, who visited the Kastanies Greek-Turkish border crossing station at Evros earlier on Wednesday with Foreign Affairs Minister Nikos Dendias, reaffirmed that the EU is committed to the protection of Greece’s sovereignty. 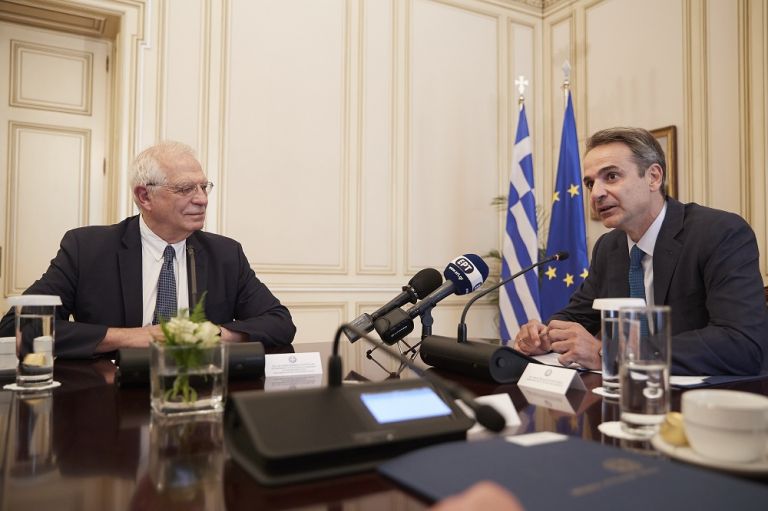 These borders are decisively guarded and the EU’s support for Greece will be steadfast, as was demonstrated by the visit of EU high officials at the Evros Greek-Turkish border in March, both men reportedly underlined.

Borrell, who visited the Kastanies Greek-Turkish border crossing station at Evros earlier on Wednesday with Foreign Affairs Minister Nikos Dendias, reaffirmed that the EU is committed to the protection of Greece’s sovereignty. He also referred to the overflights of Turkish fighter jets into Greek air space and Turkey’s announcements of illegal drilling in the East Mediterranean.

The EU official also noted however the importance of building a basic level of dialogue and trust with Ankara, an issue he said he had discussed extensively earlier with Dendias.

«For our part, we were also very clear, I hope, in expressing not only European solidarity but also our commitment to Greece, to protecting your sovereignty, your external borders, which are also the external borders of the whole of the European Union,» he underlined.

He also assured Athens that one of his most important missions is to improve relations with Turkey, and «protect the rights and interests of the European Union, of Greece and Cyprus.»

«Greece is the EU member in whose best interest it is to have good relations with Turkey, perhaps more than any other EU member state, and I believe we must collaborate to achieve this aim» and return to the old normalcy, he said.

Mitsotakis expressed his satisfaction with the fact that the EU stands by Greece «as we defend our sovereign rights,» and that it recognizes that the sovereign rights of Greece and Cyprus, two EU member states, are being violated. The Greek premier also expressed Greece’s intention to maintain open channels of communication with Turkey.

Finally, Mitsotakis and Borrell both condemned the use of the migration crisis by Ankara for political reasons, particularly to exert political pressure on the EU, which the two men said violates the EU-Turkey Joint Declaration of 2016.

Panagiotopoulos said that both he and Borrell believe that more EU states must contribute naval forces to Operation IRINI, the EU’s Common Security and Defence Policy (CSDP) military operation in the Mediterranean. He also stressed that IRINI must succeed as the EU’s credibility in carrying out operations within the area of its vital geopolitical interests is at stake.

Borrell stressed that a solution must be reached in Libya and that tensions there must de-escalate, in view of IRINI’s purpose, to enforce the UN’s arms embargo in Libya.