All of his actions regarding the pandemic highlighted Erdogan’s weaknesses. At first he refused to take protective measures against the epidemic. He ignored the warnings of scientists. 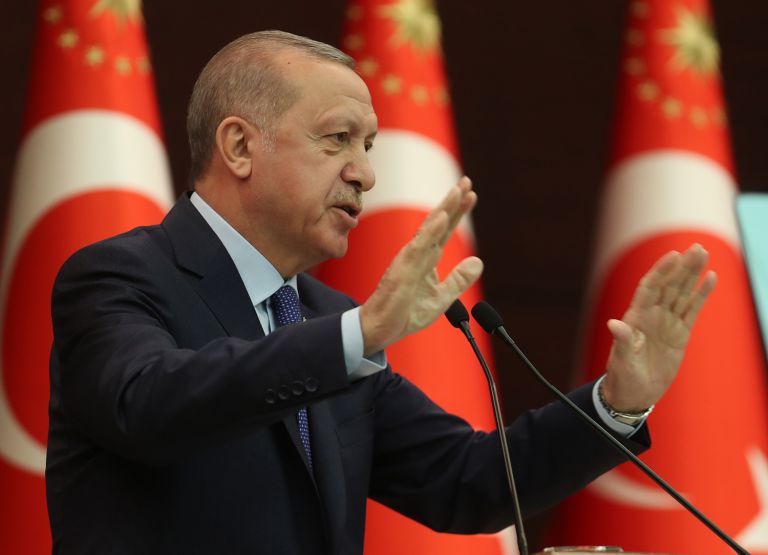 Turkish President Recep Tayyip Erdogan speaks during a press conference held after the coordination meeting to fight against the novel coronavirus, COVID-19, at the Cankaya Palace in Ankara on March 18, 2020. - President Recep Tayyip Erdogan announced on March 18, 2020, a $15 billion package to help the Turkish economy cope with the crisis over the new coronavirus, and urged Turks to leave their homes as little as possible. Turkey has so far recorded one death and 98 cases. (Photo by Adem ALTAN / AFP) (Photo by ADEM ALTAN/AFP via Getty Images)
Share

President Recep Tayyip Erdogan’s Turkey is not having an easy time.

In the pre-coronavirus period he unsuccessfully tried to open many fronts at once but did not achieve the victories that as self-styled sultan he very much desired.

Plans in Syria did not pan out and the shenanigans with the Americans and the Russians exposed him.

Credibility and trust were lost. There have been no results from his acrobatics in the Southeastern Mediterranean or from his adventurist posture in Libya.

Domestically the economy has in distress from the beginning of 2020.

Then there was the ridiculous notion that cologne protects against Covid-19 and the view that in any event the virus is unable to infect Turks.

All this highlighted Erdogan’s weaknesses. At first he refused to take protective measures against the epidemic. He ignored the warnings of scientists.

He aligned with other revisionists of our time including Trump, Bolsonaro, and Johnson and paid dearly for it.

When the virus spread he tried to take restrictive measures but in a piecemeal fashion. The disease spread. Restrictions were extended with few results and in the last days he imposed a four-day quarantine.

He succeeded only in laying bare Turkey’s economic problems.

Now Erdogan is seeking salvation from the US.

He forgot about his order of the Russian S-400 missiles and raised tariffs by 30 percent to stem a cash exodus and to check the plunge of the Turkish lira that has obliterated the income of poorer Turks.

The complex impasse has led him to try to “export” his problems to Greece and to unleash attacks against countries which view his actions and choices as inconceivable.

Still, the domestic front will not close and doubts abound. Citizens are disputing him and he answers that there is a threat of another coup, as if he were not the chief and guide of the Turkish Armed Forces.

The revelation is complete. Turkey is experiencing the absurdity of Erdogan’s rule and no one can foresee the outcome.

Greece must be prepared for all eventualities.