Editorial: Europe hostage to its values

The projections of analysts, economists, and international organisations point to an horrific landscape the day after the pandemic. 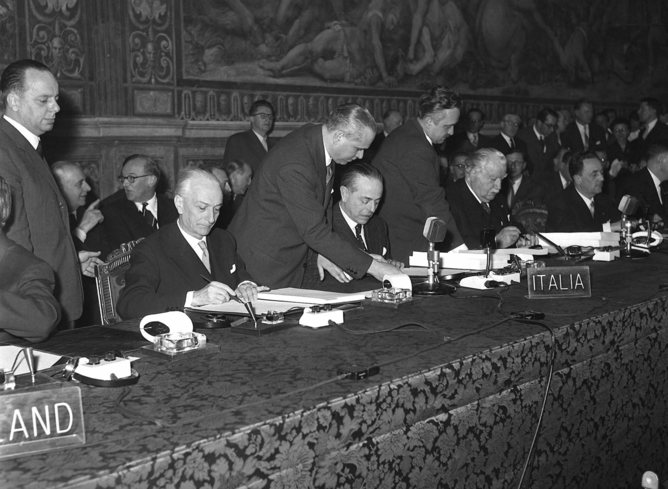 epa000303505 (FILE) A black and white file photo dated 25 March 1957 shows the then Italian Prime Minister Antonio Segni (1st L sitting) and Foreign Minister Antonio Martino (2nd L sitting) signing during the ceremony in which two treaties were signed that gave existence to the European Economic Community (EEC) and to European Atomic Energy Community (Euratom) - the Treaties of Rome - in the Baroque Horatii and Curiatii Hall of Campidoglio Palace, Rome's City Hall, where Friday 29 October 2004 the signing ceremony of the European Constitutional Treaty takes place. EPA/ANSA ONLY AVAILABLE IN BLACK AND WHITE
Share

We are living in an historic era.

The world is experiencing the greatest crisis since WWII.

The total freezing of the global economy and social life is a phenomenon that is historically unique.

The projections of analysts, economists, and international organisations point to an horrific landscape the day after the pandemic.

Germany and France are sinking into a recession of historic magnitude and projections about the global labour market are nightmarish.

The shock to the economy exceeds by far the financial crisis of 2008 and the public debt crisis of 2010 and the more pessimistic analysts are likening the current situation to the 1929 Crash.

Such fears are based on the nature of the enemy with which the entire planet is confronted. It constitutes an asymmetrical threat with symmetrical characteristics.

It deals a heavy blow to public health, production, demand, and the financial system.

The duration of the upheaval that it has triggered is still unknown and that aggravates the uncertainty adding more variables to a difficult equation.

The moment of truth has arrived and there is absolutely no room for further delays.

Today’s Eurogroup, the meeting of eurozone finance ministers, will determine the cohesion and the very future of Europe.

The ideal of solidarity upon which the European projected was founded is being put to the test in a most palpable manner.

There is no choice but to take brave and convincing decisions.

As the former deputy premier and constitutional scholar Evangelos Venizelos put it, Europe is hostage to its values and civilisation.
European leaders face the challenge of respecting and serving these values.

History will judge them.