In his first accounting to Parliament since the crisis started one month ago, Mitsotakis thanked “the overwhelming majority of citizens who have accepted the limiting of their personal freedom”. 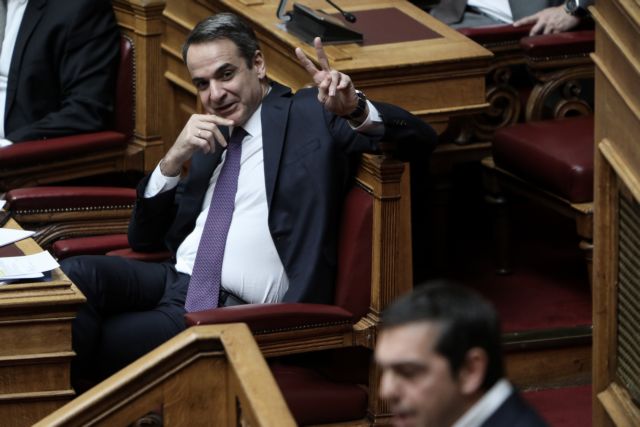 Having garnered international praise for Greece’s success in significantly containing the spread of the coronavirus , Prime Minister Kyriakos Mitsotakis is stressing the importance of concerted collective action with a focus on the timely enforcement of social distancing.

Even more, he is extolling the owerwhelming compliance of the Greek people with strict public health guidelines including a partial lockdown.

«What we did that I think was successful was to implement strict social distancing measures relatively early and this seems to have worked,» Prime Minister Kyriakos Mitsotakis said in an interview with CNN’S Christiane Amanpour.

The first was the challenge of luring direct foreign investment – through a restructuring of highly inefficient state structures and of a decimated economy that exited the extreme austerity of bailout memorandums but has yet to stand firmly on it feet.

. The cost of borrowing reached a record low of less than two percent on a 10-year bond issue but investment remains slow

The second was the challenge of beating off with strong EU support a Turkish push to send hundreds of thousands of migrants through Greece to other EU countries. However he had previously abolished the migration ministry only to reinstitute it months later after thousands of migrants crossed to Greece from the Turkish coast.

The challenge of leadership

Yet it is on his prudent handling of the pandemic crisis through meticulous planning and organisation with a 19-member scienific A-team, some with international laurels, whose advice he has adhered to faithfully.

Mitsotakis also managed to put together in no time a highly effective communications strategy.

That includes 11 million euros earmarked for a nationwide information campaign on the guidelines and strategy of handling the pandemic.

Most of that money is going to an intensive campaign of public service messages on all nationwide broadcast channels.

Moreover, television newscasts and panels focus almost exclusively on driving home the necessity of the lockdown.

The slogan “We stay home” (protecting our lives and those of others) has become a mantra that has effectively communicated to the vast majority of the public the urgency of complying with the nationwide lockdown and of abiding by strict social distancing guidelines.

At first the PM  himself carried the weight of driving home the potentially devastating impact of the pandemic and the crucial importance of abiding by public health guidelines in a series of brief national addresses.

Then the chairman of the scientific committee, Athens University Professor of Infectious Diseases Sotiris Tsiodras (a clinician) picked up the baton as health ministry spokesman with a daily, nationally-televised press briefing where he summarises international developments and details the data on new confirmed cases, the small daily death toll,  and the number of intubated patients, before taking questions in writing from reporters accredited with the ministry.

Reeporters are not in the room and have no electronic connection which rules out the possibility of follow-up questions and allows the ministry to pick and choose questions.

Immediately thereafter Civil Protection Underminister Nikos Hardalias bluntly admonishes the public to adhere faithfully to restrictions on movement, brandishing the threat of an even tighter lockdown if public health guideline are breached. The latest measure was a prohibition of the Easter Sunday tradition of roasting lamb on a spit in the yard of homes as normally neighbours visit and a gathering increases the possibility of coronavirus transmission.

First parliamentary debate since start of crisis one month ago

In his first accounting to Parliament since the crisis started one month ago, Mitsotakis during parliamentary debate thanked “the overwhelming majority of citizens who have accepted the limitations on their personal freedom”.

Main opposition leader Alexis Tsipras stressed SYRIZA’s support for the government’s restrictive measures but underlined the importance of regular parliamentary sessions albeit with just a few MPs and the leaders of each party.

“We support does not mean we remain silent when the heroes (doctors and nurses)  with the white and green shirts cry in desperation that they still do not have adequate materials and equipment,» he said.

MIstotakis: ‘Perhaps the end of the beginning’

“We are not at the beginning of the end. We are perhaps at the end of the beginning,” the PM said, quoting Churchill in underlining the need for a continuation of the lockdown in a long and uncertain battle.

He also denounced Viktor Orban’s exploitation of the pandemic as a pretext to institute rule by decree in Hungary.

Mitsotakis compared the protracted complacency of other countries with his government’s move to swiftly close schools and to shut down almost all types of shops on 15 March when the lockdown was announced.

He said that Belgium with nearly the same population has an inordinately bleaker picture.

Mitsotakis thanked the heroes in green and white shirts, the underministry of civil protection, and security forces for their tireless work.

“We have utilised the total capabilities of private health sector,” he said,  to which Tsipras responded that private clinics overnight  doubled the cost of an ICU bed from 800 to 1,600 euros.

He said the government is moving extremely swiftly in procuring equipment amidst intense international competition and he suggested that SYRIZA blindly opposes private sector entities.

Tsipras, suggesting that the government has not adequately supported the public health system, replied that all the Covid-19 patients are turning to public hospitals

“Is whatever is not state run bad?” the PM had previously declared in a barb againstg SYRIZA.  He said that private entities have contributed 500 hospital beds, millions of masks, respirators ,and other equipment to the public health system.

Parliament made a donation to fund a strong, modern 50-bed ICU unit  at the Sotiria pulmonary diseases hospital, which is handling most Covid-19 cases.

“Our main concern was maintaining jobs and ensuring a just social welfare programme,” MItsotakis said of the government’s stimulus package

He said the compensation of employees of businesses shut down by government mandate is a large percentage of their salary.

“We also chose a horizontal stipend of 800 euros [to employees of closed businesses] and layoffs have been prohibited at businesses receiving state support.

For businesses the state shut down the government has suspended tax instalment payments and insurance contribution obligations.

“There is no growth without support for labour and business,” the PM declared.

He said 108,00 doctors, nurses, ambulance workers,  nurses, and civil protection staff will receive a special bonus in recognition of their heroic contributions

Moreover, 150 million euros will be spent to support farmers and the  agricultural sector overall

The PM underlined the importance of the fact thyat  Greece has been admitted to the ECB’s QE programme.

Moreover, in a crucial EUmove, Greece’s primary surplus targets agreed to with creditors have also been lifted,

Mitsotakis noted Jacque Delors’ recent statement that at this juncture a lack of solidarity imperils the EU with dissolution. Delors served as President of the European Commission (1985-1996) who was instrumental in securing major funding packages for Greece.

“There can be no good and bad peopled in this crisis…I believe absolutely in a democracy of persuasion and I staunchly critise the few who flout public health measures,” he declared, essentially calling for a halt of partisan rhetoric as regards the crisis.

The Easter service will not be attended but televised

“The Easter of love this year must be the Easter of responsibility,” the PM said of the government’s tortuous decision to keep churches closed due to the pandemic. Services will be performed behind closed doors with only a priest and a cantor. The Church of Greece has announced that a Resurrection service for the faithful is planned for 27 May.

«We have virtually the full cooperation of the Greek people and I would like to thank them for the fact that they respected our instructions and actually stayed home with very few exceptions,» he stressed, adding that «the hard work is still ahead of us.»