Greek infectious diseases experts say that will hopefully occur by late May, if public health measures are thoroughly enforced and succeed in limiting the spread. 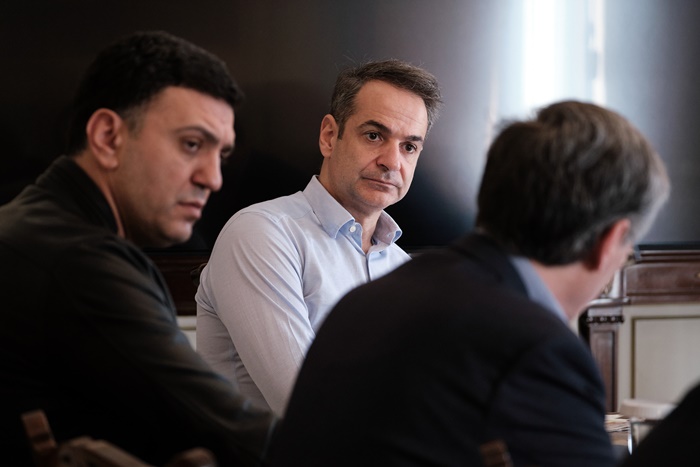 A mini –cabinet meeting to discuss the coronavirus pandemic-management plan today with ministers at a two-metre distance from each other decided to expand restriction of movement such as a ban on organised beaches, to which many Greeks had repaired to break the enclosure of self-isolation.

Greek cities large and small are gradually transforming into ghost towns and the closure of all shopping malls, cafes, bars, and restaurants and various shops except for supermarkets and pharmacies (only two at a time inside) has contributed to the drastic fall of traffic in public places.

The stance of the government and infectious diseases (ID) experts such as Professor Sotriris Tsiodras – who advises the competent National Organisation for Public Health (EODY) and is a top advisor to PM Kyriakos Mitsotakis – is to urge and force Greeks nationwide to hunker down at home until the coronavirus tsunami recedes.

Draconian penalties for public health measures violations have also been put in place.

Controversial stiff fines and even jail sentences have been passed to punish those who knowingly flout public health guidelines and infect or put the health of others at risk.

Moreover, 45 employees of illegally open shops were arrested today in an initial display of the government’s zero tolerance policy on breaches of public health guidelines.

Greek ID experts say that will hopefully occur by late May, if public health measures are thoroughly enforced and succeed in limiting the spread.

Meanwhile, neighbouring Albania has decided to seal its border with Greece.

Many analysts and pundits compared the drastic measures to restrict the spread of the virus to measures taken during wartime, and the battle to contain the virus is often described as a war.

The government is still struggling to project the magnitude of the catastrophic economic impact of the crisis.

It is perfectly clear already that the economy’s first steps toward restoring normalcy will face enormous challenges that will jeopardise and derail the government’s reform measures and greatly delay recovery.

It is scurrying to swiftly address the economic emergency with an initial framework of compensation for businesses which are being battered by the expected extended lockdown.

Orthodox Church gradually abandons immunity of faithful doctrine
Following severe criticism of the Orthodox Church of Greece – because clerics maintained on various television programmes that one cannot contract the virus from Holy Communion as it is the true body and blood of Christ who could not could not possibly transmit a virus – one sees a shift toward a more rational, scientific assessment.

Archbishop Ieronymos of Greece has reportedly faced strong pressure from the PM’s office and government to sway his fellow bishops to keep the faithful away from churches – and not just the elderly and members of vulnerable groups which the Holy Synod accepted.

Mitsotakis calls on Church to comply

Mitsotakis himself in a nationally televised address said that the Church will not be exempted from strict restrictions on public gatherings.
A meeting of the 13-member Permanent Holy Synod chaired by Ieronymos is due to issue a new, comprehensive position on 16 March.
Three dead, glimmer of hope on containment of spread rate.

The one positive development is that the rate of spread of COVID-19 appears to be falling somewhat with 200 new cases confirmed on 14 March compared to 250 the previous day.

Greece has recorded 21,150 cases. There are 57 hospitalised cases, seven of them on life support