The heads of EU institutions in a highly symbolic move intended to express solidarity with Greece and send a message to Turkey will on 3 March visit the Evros border region with the PM. 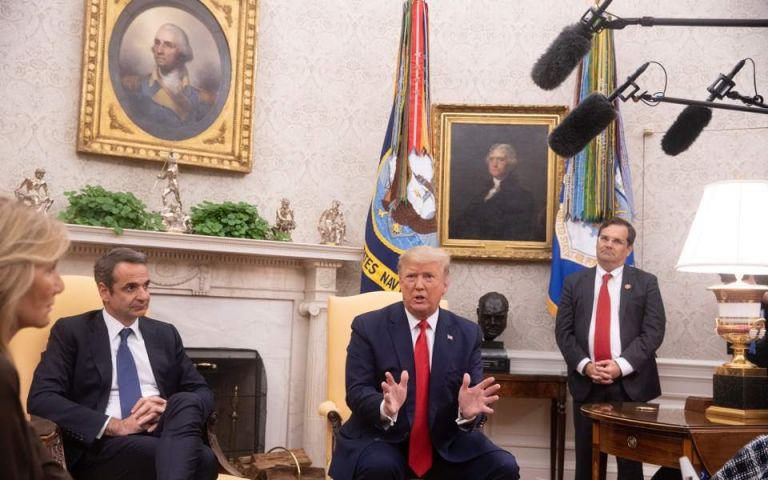 Prime Minister Kyriakos Mitsotakis today briefed US President Donald Trump on the threat to Greece’s sovereignty from mounting waves of migrants and refugees from Turkey.

Athens charges that the migrants have been encouraged and coordinated by Ankara and is determined to protect its borders.

The telephone contact came on the eve a highly symbolic visit of top EU officials to the Evros Greek-Turkish border region where over 10,000 refugees and migrants in attempts to cross over to Greek territory over the weekend threw stones and teargas at Greek police guarding the borders.

At the same time Washington turned down Ankara’s request for Patriot missiles for use in its war against Russian-backed Syrian forces in Idlib, which is expected to result in an exodus of up to one million Syrian refugees toward Turkey, ratcheting up pressures on Greece with a large new wave of migrants.

The heads of EU institutions in a highly symbolic move intended to express solidarity with Greece and send a message to Turkey will on 3 March visit the Evros border region town of Kastanies accompanied by the prime minister and competent Greek officials.

PM Mitsotakis will receive European Council President Charles Michel, European Commission President Ursula von der Leyen, and European Parliament President David Sassoli in the city of Alexandropoulis and they will fly over and view the Evros border region by helicopter.

They will give a joint press conference afterwards.